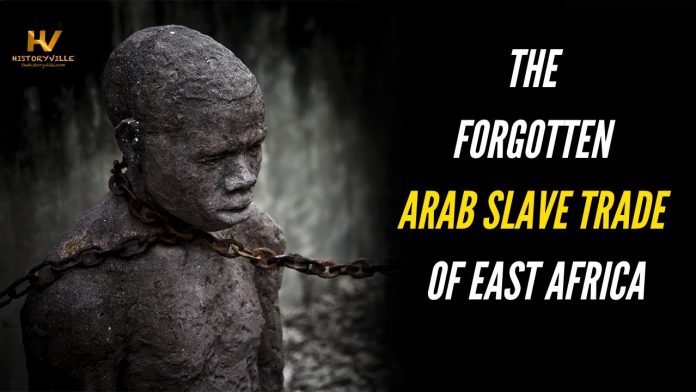 The Arab slave trade in East Africa is one of the oldest, stretching back 700 years before the European transatlantic slave trade. Male slaves were frequently employed by their masters as servants, soldiers, or labourers, whilst female slaves, notably those from Africa, were long transported to the Middle Eastern countries and kingdoms as concubines and maids by Arab and Oriental dealers.

The Trans-Atlantic slave trade, which involved Western slave dealers, has received a lot of attention and discussion throughout the years. In contrast, the Arab slave trade has been largely overlooked, at times even viewed as a taboo subject. Despite being a crucial part of African history and having a catastrophic impact on the continent, its generations, and a people’s way of life. However, both historians and experts have blurred the lines on this subject.

So, in this article, we shall expose the dark past and the forgotten Arab slave trade of East Africa. You can watch the video here.

The Arab Slave Trade: An Introduction

During their period of dominance by Arab leaders, the Arab slave trade was the practice of slavery throughout the Arab world, primarily in Western Asia, North Africa, East Africa, and select regions of Europe (such as Iberia and Sicily). Slave markets in the Middle East, North Africa, and East Africa were the core of the trade. Turks, Iranians, Europeans, and Berbers were among the people traded in the early days of the trade, and they included Turks, Iranians, Europeans, and Berbers.

During the era of the Fatimid Caliphate, that is, the eighth and ninth centuries, the majority of slaves were Europeans taken along European beaches and during conflicts.

With the emergence of the Oman sultanate, which was centred in Zanzibar, the trading of Bantu slaves from East Africa grew in the 18th and 19th centuries. Along the Swahili coast, they came into direct trade friction and competition with the Portuguese and other Europeans.

Thousands of European Christians were enslaved by the North African Barbary pirates, who engaged in piracy against European merchants. They profited from the ransoms demanded; in many cases in the United Kingdom, village churches and communities raised funds for such ransoms. The government refused to pay the ransom demanded by the pirates for its citizens.

Between 650 and 1900, historians estimate that 10 to 18 million Africans were enslaved by Arab slave traders and transported over the Red Sea, Indian Ocean, and Sahara. Many of the “Arab” slave dealers, such as Tippu Tip and others, were physically indistinguishable from the “Africans” they enslaved and sold. Hence, the name “Arab” was commonly employed as an ethnic designation in historical sources. It is impossible to be specific about actual numbers because of the nature of the Arab slave trade.

Arabs enslaved Europeans to a lesser extent. According to studies, between 1 million and 1.25 million Europeans were seized and sold as slaves by Barbary pirates, who were vassals of the Ottoman Empire, between the 16th and 19th centuries. Slaves were taken primarily from seashore villages in Italy, Spain, and Portugal, as well as from further afield in France, England, the Netherlands, Ireland and even Iceland.

They were also taken from pirate-captured ships. Thousands of ships were lost in France, England and Spain as a result of these raids. Because of regular pirate attacks, huge areas of the Spanish and Italian coasts were nearly totally abandoned by their populations. Until the 19th century, pirate raids prevented settlement along the coast.

For example, the Almohad caliph, Abu Yusuf Yaqub al-Mansur, captured 3,000 female and child captives in an assault against Lisbon in 1189, while his governor of Córdoba captured 3,000 Christian slaves in a subsequent attack on Silves in 1191.

Large numbers of European Christian slaves were also taken into the Muslim world as a result of the Ottoman wars in Europe.

Was it a Muslim Slave Trade?

Some Muslims object to the labels “Islamic trade” and “Islamic world” because they portray Africa as outside of Islam or as a minor part of the Islamic world. Propagators of Islam in Africa were often wary of evangelizing because of the effect on the prospective slave reservoir.

The Arab Slave Trade predates Islam and lasted for over a millennium. Arab slave traders transported Africans from present-day Kenya, Mozambique, Tanzania, Eritrea, Ethiopia, and other parts of East Africa to Iraq, Iran, Kuwait, Somalia, Turkey, and other parts of the Middle East and South Asia across the Indian Ocean (mainly Pakistan and India). Unlike the trans-Atlantic slave trade, Arab slave traders supplied African slaves to the Muslim world, which, at its apex, spanned three continents from the Atlantic to the Far East.

Zanzibar is now regarded as one of East Africa’s top tourist attractions, with white sand beaches, crystal blue oceans, and hotels offering visitors from all over the world a memorable vacation.

The grim past that loomed over this beautiful paradise 200 years ago has long been forgotten. The archipelago, which is now a semi-autonomous territory of Tanzania, was the epicentre of the Arab slave trade in East Africa at the time.

Aside from precious raw goods like ivory and prized cloves, one thing stood out in the colourful markets above all else: hundreds of slaves.

Arab Muslims in North and East Africa were selling captive Africans to the Middle East at the time. Castration of male slaves was typical practice there since they worked as field labourers, tutors, or guards of the sultan’s harem.

According to Islamic legal principles, Muslims, including African Muslims, were not permitted to be enslaved.

Initially, Arab Muslims in Eastern and Central Europe took white slaves to sell to Arabia, but as Europe’s military power grew, Islamic expansion was halted, and now that slaves were few, Arab Muslims turned to Africa in large numbers.

Roots of Slavery in Africa

Slavery has been practised in almost all cultures. This was also true in Africa prior to the arrival of colonizers. Ethnic groups such as the Yao, Makua, and Marava were fighting each other in central East Africa, while entire peoples on the continent traded with people they had taken in conflicts.

As a result, Arab slave traders came across pre-existing institutions that aided in the procurement of slaves for their goals. In Zanzibar, the slave trade thrived. Arabs were looking for slaves to transport to the Middle East or to work on clove crops.

Slavery was a component of various African cultures as well. When it came to exports, tribal Africans were the most important players. Because many African communities lacked prisons, people who were captured were sold.

Zanzibar as the Slave Market of East Africa

From the 17th century forward, the slave trade in East Africa exploded. Omani merchants are increasingly settling in Zanzibar. Because of the huge trade along the Swahili coast, the island became even more significant in the international trade of products and, as a result, in the slave traffic. This was how East Africa’s largest slave market came to be.

There are only estimates as to how many Africans were traded from East to North Africa, some of which vary greatly. This is also attributable to the fact that a large number of slaves died. According to scientific evidence, approximately three out of every four slaves perished before reaching the market where they were to be sold. Hunger, disease, or tiredness from long trips were the causes.

Eight million Africans were transported from East Africa to Morocco or Egypt via the Trans-Saharan route. A total of nine million people were deported to the Red Sea or the Indian Ocean.

The Scottish missionary and explorer, David Livingstone attested that 50,000 slaves were sold (by Arab slave traders) in Zanzibar’s markets each year. However, contemporary historians have questioned this statistic.

Slaves were not all transported to Egypt or Saudi Arabia. Omani settlers began farming cloves in Zanzibar in 1820 in order to supply the growing demand on the international market. Large plantations grew fast, and slaves could be purchased for a low price in a local slave market.

The number of exported cloves increased from 565 to 12,600 kilogrammes between 1839 and 1860. Zanzibar’s image shifted from that of a slave-trading hub to that of a slave-holding centre, producing infamous people such as the famed slave trader Tippu-Tip.

The End of Slavery?

A slave insurrection broke out in what is now Haiti and the Dominican Republic towards the end of August 1791. The eradication of the transatlantic slave trade, slavery, and colonialism in Africa was greatly aided by these two uprisings.

Sultan Seyyid Barghash of Zanzibar, however, did not sign a treaty making the slave trade illegal in his territory until 1873, when he was pressured by the British to do so. That decree, too, was not successfully enforced until 1909, when slavery in East Africa was finally abolished.

The 1649 Execution of King Charles I of England