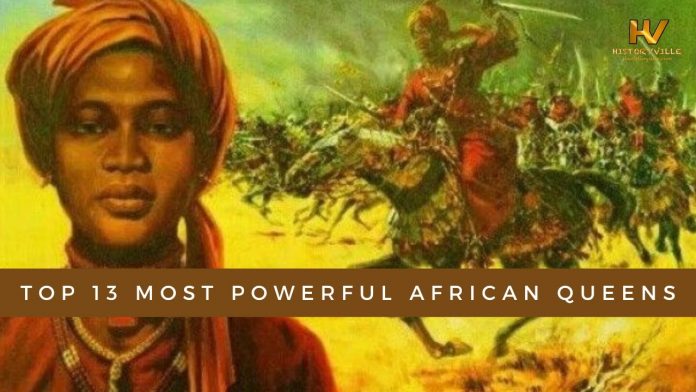 Throughout African history, women have held positions of leadership. Whether they were queens or chiefs, or leaders of movements, women have indeed written their names in the annals of African history. Call them whatever you like…boss ladies, feminists, women rights activists, dictators…These African queens and warriors led men to war, ruled kingdoms, and called the shots. Some even resisted European domination and colonialism.

In this video, in no particular order, we bring to your view the top 13 most powerful African queens.

In 1828, Ranavalona I became the sovereign of the Kingdom of Madagascar. She ruled for 33 years. After positioning herself as queen following the death of her young husband and second cousin, Radama the first, the queen pursued a policy of isolationism and self-sufficiency. She reduced economic and political ties with European powers, repelling a French attack on the coastal town of Foulpointe.

In 1835, Ranavalona, one of the cruellest African queens in history, forbade the practice of Christianity among the Malagasy population, and within a year, nearly all foreigners had left her territory.

On August 16, 1861, the queen died in her sleep. Twelve thousand zebu were slaughtered and their meat distributed to the populace in her honour with the official mourning period lasting nine months.

Although Ranavalona has been traditionally depicted as a cruel tyrant, modern historians view her as an astute politician who effectively protected the political and cultural sovereignty of her nation from European encroachment.

“Foremost of noblewomen”, that’s the meaning of her name. Hatshepsut was a female pharaoh of Egypt and one of the earliest African queens of Ancient Egypt. She reigned between 1473 and 1458 B.C.

Her rule was relatively peaceful and she was able to launch a building program that would see the construction of a great temple at Luxor.

Hatshepsut also launched a successful sea voyage to the land of Punt, a place located somewhere on the northeast coast of Africa, present-day Eritrea and Ethiopia.

The fact that a woman became pharaoh of Egypt was very unusual but Hatshepsut ruled as Pharaoh, rather than wielded power as the ‘great wife’ of a male king.

Initially, Hatshepsut was to serve as regent. She did this for three years until, for reasons unknown, she became a pharaoh in her own right.

She took on a full throne name, and statues were created depicting her as a male king (not as the other African queens), right down to the beard.

Soon after her death in 1457 B.C., Hatshepsut’s monuments were attacked, her statues dragged down and smashed and her image and titles defaced. Although Hatshepsut was given a befitting burial in the Valley of the Kings, her memory was not honoured.

Candace or Kandake was the name given to any of the African queens of Ethiopia by the Europeans, and these great women were seen to be wives of the gods or the living God!

Candace of 332 BC has a particular story that still stands tall today. Despite the little knowledge of these African queens, this legend made its way out.

Her actual name was said to be Amanirenas. She was blind in one eye due to losing it in a battle with the Romans and was known to be a fierce, tactical, and uniting leader.

A legend in “The Alexander Romance” claims that when King Alexander the Great attempted to conquer her lands in 332 BC, she arranged her armies strategically to meet him and was present on a war elephant when he approached Ethiopia. Having assessed the strength of her armies, Alexander decided to withdraw from Nubia, heading to Egypt instead.

This account originated from “The Alexander Romance” by an unknown writer. It is commonly quoted, but there seems to be no historical reference to this event from Alexander’s time. The whole story of Alexander and Candace’s encounter appears to be legendary.

Angola’s Queen Nzinga is one of the most celebrated African queens who resisted European colonization. Nzinga Mbande waged a war against the Portuguese in Angola for four decades, from the 1620s to the 1660s.

Nzinga’s capacity as a negotiator and military strategist remains unchallenged: she was directly responsible for reducing the Portuguese colony in Luanda, present-day Angola to a few square miles.

One, she wanted to stop the conflict between the Portuguese and her people, which destroyed the plateau of Luanda.

Two, she wanted to obtain the diplomatic recognition granted to Kongo by the Portuguese, and

Three, she wanted Luanda and the Europeans to develop a daily and profitable trading relationship.

In the 1630s and 1640s, she forged an alliance with Dutch slave traders and used her wealth to consolidate her position.

The queen also overcame traditional Mbande resistance to women in politics, employing Mbande runaway slaves and others as mercenaries against local resistance where necessary. After a continuous war against the Portuguese, she concluded a treaty with them that largely fulfilled her initial goals, and her policy continued successfully until her death.

Nzinga had been able to dominate Kimbundu politics for 40 years through her clever manipulations of the Portuguese and the Imbangala. Her legacy, if conflicting, is enormous.

First, she was a monarch who was able to inspire her people to resist the Europeans.

Second, she had exceptional energy, and her position as a warrior and an anti-colonialist is an excellent example of African women’s dedication to self-reliance and survival values.

Nzinga, one of the most influential and powerful African queens in history, was able to maintain peace until her death in 1663 at about 81. She died a Catholic, and the missionary advisors she had cherished in the last eight years of her life surrounded her deathbed.

In 960 B.C., the nation that is now called Ethiopia came back to the centre of the stage of history. Ethiopia was then represented by a queen, who in some books is referred to as Makeda. She is better known to the world as the Queen of Sheba.

Makeda, according to legend, is the mysterious and majestic Queen of Sheba (one of the most powerful African queens of her time), and the beloved of King Solomon of Judea.

However, according to the Old Testament of the Holy Bible, she is portrayed as a chaste and unnamed queen of the land of Sheba who heard of the great wisdom of King Solomon of Israel and journeyed there with gifts of spices, gold, precious stones, and beautiful wood and to test him with hard questions.

The queen was awed by Solomon’s great wisdom and wealth and pronounced a blessing on Solomon’s deity. Solomon reciprocated with gifts and “everything she desired,” as the queen returned to her country. Makeda was apparently quite rich, however, as she brought 4.5 tons of gold with her to give to Solomon, a sign of great power and wealth.

Makeda was a beautiful powerful black woman who and out of love, converted to Judaism. It was reported that she and Solomon both had a son, Menelik I, who would become the first Emperor of Ethiopia and establish the Solomonic dynasty.

In the course of this documentary, you must have been familiar with the story of Queen Amina of Zaria, unarguably one of the most powerful African queens to have emerged from present-day Nigeria. But did you know that some few kilometres from Zaria, another queen had ruled a Hausa kingdom around 200 years before Amina was born?

Yes! Queen Yargoje of Zamfara in present-day North-West Nigeria, reigned for 40 years from 1310 to 1350. She expanded and relocated the capital of the Kingdom from Dutsi to a more tragically defendable area at Kuyambana.

One of the most powerful African queens of her generation, Yargoje was the first daughter of Dakka, the fifth King of Zamfara. She was not only queen, but she was also head of the Bori cult which was a pre-Islamic mode of worship in parts of Hausaland. During her reign, there were female chiefs appointed for the first time in the Kingdom. This African queen surrounded herself with female chiefs, who were not known before the time of her reign. Interestingly, her reign was long and peaceful. In fact, it was a prosperous era.

Queen Idia was the mother of Esigie, the Oba of Benin who ruled from 1504 to 1550 in present-day Southern Nigeria. She played a very significant role in the rise and reign of her son. One of the most influential African queens in history, Idia has been described as a great warrior who fought relentlessly before and during her son’s reign as the Oba of the Edo people.

When Oba Ozolua died, he left behind two powerful sons to dispute over who would become the king. His son Esigie controlled Benin City while another son, Arhuaran, was based in the equally important city of Udo about 30 kilometres away.

Idia mobilised an army around Esigie at Unuame on the River Osse, which defeated Arhuaran, and Oba Esigie became the 16th king of the Benin Kingdom.

Subsequently, the neighbouring Igala people sent warriors across the Benue River to wrest control of Benin’s northern territories. Esigie conquered the Igala, reestablishing the unity and military strength of the kingdom. His mother Idia received much of the credit for these victories as her political counsel, together with her medicinal knowledge, were viewed as critical elements of Esigie’s success on the battlefield.

Idia became the first queen mother of Benin when Esigie conferred upon her the Iyoba title and a Palace for her as a Queen Mother.

If you would like to know more about other powerful African queens, please check out the video below.

We always have more stories to tell, so make sure you are subscribed to our YouTube Channel and have pressed the bell button for interesting historical videos. Don’t hesitate to follow us on all our social media handles and to as well share this article with your friends.