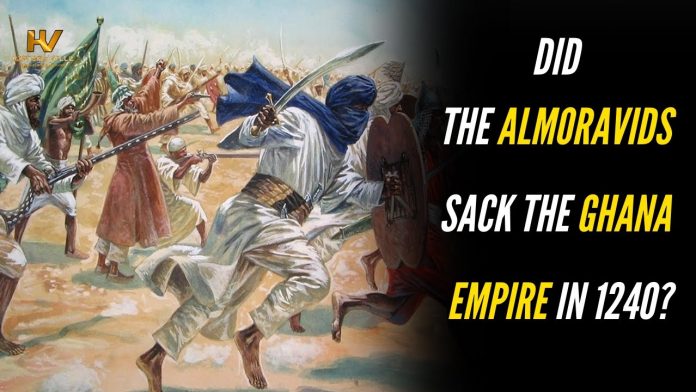 Around the same period the Arabic tribes were setting foot on the Maghreb, another nomadic group, this time the Berber, was forming in Western Sahara and making ready in its turn to break over North Africa in waves from the South-West. These were the veiled Sanhaja known to history as the Almoravids. In the space of a bare half-century, they were to constitute an enormous Berber empire in the western half of the country and in Spain.

As the Almoravids were rising as a great army, an empire was dying. The empire of Ghana would eventually succumb to extinction at the end of the 11th century.

Formation of the Almoravids

Until about 1920, virtually the only information available regarding this important epoch in the history of the Maghreb dated from between one and two centuries later than the events themselves. Only geographers like Al-Bakri, Al-Idrisi and the chroniclers, Al-Murrakushi and Ibn Al-Athir, a man of the east, were contemporary with the latest of facts they recorded. Since then Arabists and archaeologists, particularly in Morocco, the cradle of the empire, have found documents and buildings which afford better knowledge and understanding of men and events. Many points are indeed still obscure, and there are doubtless many discoveries yet to be made.

Nonetheless, we can follow quite closely the evolutionary curve of the empire and assign some reasons for their final downfall.

The original cell of the Almoravids empire was a powerful Sanhaja tribe of the Sahara, the “Lemtouna”, whose place of origin was in the Adar in Mauritania. Their custom was to traverse chiefly the desert regions stretching from the oases of southern Morocco to the country of the blacks. Perhaps as a protection against the evil eye, they wore a veil covering the lower part of their faces. Accordingly, they were never without it and were highly contemptuous of the “fly-catchers” with uncovered faces.

Many of them would live their whole life without having eaten bread. If merchants from Muslim countries or the land of the blacks did not give them some to taste or make them a present of flour for their subsistence they relied on stock raising, and also on caravan traffic, which had developed considerably in the western Sahara since the end of the 9th century.

These tough nomads were converted to Islam in the 9th century and after fighting under a single leader, they finally split up for more than a century, until the day when the energetic Emir Abu ‘Abd Allah Muhammad Ibn Tifawat assumed their control.

The Ghana Empire was a West African empire which was originally known as Wagadou. The extinct empire can be traced around present-day southeastern Mauritania and western Mali.

The empire should not be confused with the present-day country of Ghana because Ghana was the title of its ruler.

The Empire of Ghana grew rich from increased trans-Saharan trade in gold and salt, allowing for larger urban areas to develop. The increased trade encouraged Ghana’s expansion to gain control over the different trade routes.

According to Arabic scripts, the Almoravid sacked the Ghana Empire around 1076–1077, although this interpretation has been questioned.

Some modern historians argued that the notion of any Almoravid military conquest is merely perpetuated folk tale, derived from a misinterpretation of or limited reliance on Arabic scripts.

However, while the idea of the conquest was unclear, the impact and success of the Almoravid movement in securing the West African gold and wealth while circulating it widely dictated a high degree of political control.

Whatever way it was seen, Ghana’s position as a commercial and military power ended by 1100 and eventually collapsed into tribal groups and chieftaincies, some of which later assimilated into the Almoravids.

The other vestiges of the Ghana Empire were then incorporated into the rising Mali Empire around 1240.

In 1957, when the Gold Coast gained its independence from the British colonial rule, it renamed itself Ghana, in honour of the extinct empire.