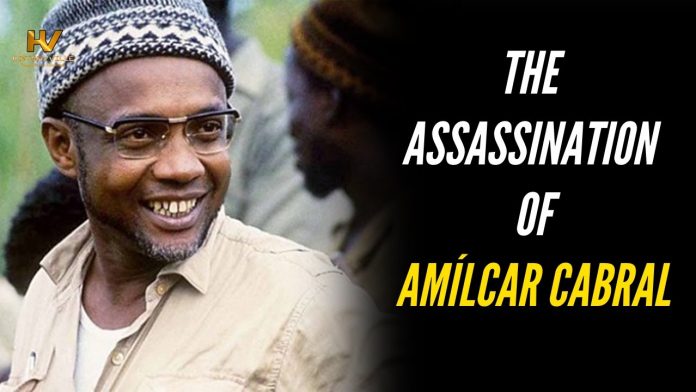 On Saturday, January 20, 1973, Amílcar Cabral was shot and killed outside his home in Conakry, the capital city of Guinea, where his political party, in the fight against Portuguese colonialism, had established its headquarters. He was just 48.

In this article, we shall take a look at the life of Amílcar Cabral, his legacies, how he died, and who killed him?

If there was ever a reference to someone being a practical philosopher, then Amílcar Cabral would have been a perfect candidate for that designation.

Born on September 12, 1924, to Cape Verdean parents in Bafatá, Guinea-Bissau, Amílcar Lopes da Costa Cabral was an agricultural engineer, writer, a Pan-Africanist, and a political leader. Cabral is also well-regarded as one of Africa’s foremost anti-colonial leaders.

Amílcar Cabral’s father, Juvenal Lopes Cabral who was also an intellectual in his own right and an author, named his son after Hamílcar Barca – the legendary war strategist and leader from Carthage, present-day Tunisia. Cabral’s mother Iva Pinhel Évora had affirmed that her son was born with politics in his head as her husband used to talk to their son about everything.

Amílcar Cabral had his secondary education at Liceu in Mindelo, Cape Verde, and later, on a scholarship, he studied agronomy at the Instituto Superior de Agronomia, in Lisbon, the capital city of Portugal. The Portuguese were the colonial masters who ruled over Guinea-Bissau and Cape Verde during Cabral’s lifetime.

During his studies in Lisbon, Amílcar Cabral founded student movements that promoted the cause of independence for African countries under Portuguese colonialism, as well as opposing the ruling dictatorship of Portugal.

Cabral found time on campus to practice his favourite sport, football or soccer, despite putting in long hours for his academics, political activity, and romantic engagements. If he had wanted to, he could have made a career out of it. His success with the institute’s football team was so impressive that he was asked to join Benfica, one of Portugal’s best football clubs.

Amílcar Cabral, on the other hand, declined the offer, preferring to stick to his school’s casual games.

Cabral never forgot about his motherland, Africa, in the face of all of these. During his student years, he felt an irresistible pull to return to Africa. Not only because of his love for his family but also because of the millions of people who needed his help in the difficult battle against nature and man himself.

In 1952, Cabral returned to his home country. He was then 28 years old. Four years later, in 1956, he founded the Portuguese for African Party for the Independence of Guinea and Cape Verde, PAIGC. As of this time, he had abandoned his job as an agronomist in Lisbon, to fight for his country’s independence from Portugal. In that same year, he became one of the founders of the Popular Movement for the Liberation of Angola, MPLA, alongside Agostinho Neto and other Angolan nationalists, whom he met in Portugal.

The Portuguese started using “divide and conquer” methods on the PAIGC leadership and supporters. They implemented policies that divided the Cape Verdeans and Guineans. The former, who are mostly mixed-race children, were better educated and preferred by the central government. They were assigned to less unpleasant jobs and received preferential treatment.

The highest class of the PAIGC was made up of Cape Verdeans, with Guineans serving as foot soldiers. Despite the fact that he was born in Guinea, Amílcar Cabral was considered a Cape Verdean. As a result, tensions and disagreements were always present within the PAIGC.

Despite these setbacks, Amílcar Cabral fought tirelessly to maintain the PAIGC’s internal harmony and cohesion, allowing it to effectively combat Portuguese imperialism in Cape Verde and Guinea Bissau. Cabral also pursued and continued his botanical and agricultural studies, which required him to travel between Portugal, Angola, and Guinea on a regular basis.

Amílcar Cabral distinguished himself from other African revolutionary leaders and theorists by the emphasis he put on culture and its role in the liberation struggle and in the transformation of society. If Cabral was still alive, he would be leading the fight for the rehabilitation and reclamation of African culture, including the significant looted treasures stolen by the European colonial masters, now located in many European and American museums.

First, the peasantry in Guinea was not a revolutionary force but a physical and political one. These peasants were almost the whole population and produced the nation’s wealth – so they had no revolutionary history. Because of this, it was difficult for Amílcar Cabral to build support and establish his idea of national liberation among the peasantry.

Cabral’s second challenge was that some elements of the little bourgeoisie, that is the middle class, were revolutionary in nature. By little bourgeoisie, he meant the citizens working in the colonial civil service who benefited from colonialism but were never fully integrated into the colonial system. Thus, this set of people was trapped in-between two cultures – the colonial and the colonized, with no clear desire to carry out a political or social revolution.

In spite of the challenge with the middle class that was created by foreign control and was vital to the operation of colonial exploitation and domination, Cabral’s PAIGC revolution relied on them despite being a marginalized class.

Amílcar Cabral, in a speech he delivered in Havana, the capital city of Cuba, in 1966, stated that the middle class had to fight against colonialism and imperialism by organizing and building alliances with the peasants. In other words, what Cabral meant was that the little bourgeoisie had to commit class suicide.

For ten years, that is, from 1963 up to his assassination and death in 1973, Amílcar Cabral was at the forefront of the guerrilla movement of the PAIGC in Guinea against the Portuguese government. This struggle grew into one of the most successful wars of independence in modern African history.

While preparing for this war of independence, President Kwame Nkrumah of Ghana allowed Cabral to set up training camps in the country. He successfully trained his PAIGC foot soldiers with the support of the Guinean tribal chiefs.

During the course of the conflict, Amílcar Cabral also set up a mobile hospital to render medical care to the wounded soldiers. The hospital also ensured that quality-of-life care was given to the larger population.

Compared to paramilitary movements in other Portuguese colonies, the PAIGC quickly established military control over large areas of the region, helped by the jungle-like terrain, easily accessible borderlines with neighbouring allies, and great amounts of weapons from China, and Cuba, the Soviet Union and left-leaning African countries.

Cuba also supported the PAIGC by providing artillery specialists, doctors, and technicians. In order to defend itself against aerial attacks, the guerilla movement even acquired a significant anti-aircraft capability. The PAIGC had established control of much of Guinea by 1973, but Cabral’s assassination in January 1973 dealt a blow to the cause.

Amílcar Cabral always knew his life was in continuous danger. He had allayed his fears to a visitor at a hotel room in New York in October 1972. True to his fears, he was assassinated at his home in Conakry on January 20, 1973, by one Inocêncio Kani who was a disgruntled member of Cabral’s party – PAIGC.

Although there are no doubts about who directly killed Amílcar Cabral, what is unclear to this day was who really ordered his assassination. Interestingly, mucky fingers would point to the Portuguese in this case. Back in 1972, three months before his assassination, Cabral had alleged that the Portuguese agents were after his life after they had invaded his home in Conakry to have him killed.

Thus, the man who would eventually kill him, Inocêncio Kani, was believed to have worked with Portuguese agents to carry out his assassination.

Portugal had attempted to capture Amílcar Cabral for several years as part of its efforts to destroy the PAIGC’s organizational structure. After failing to capture him during Operation Green Sea in November 1970, the Portuguese began utilizing PAIGC agents to remove Cabral.

The likely plan was to arrest Cabral and then put him on trial, but when he did not resist nor act in a violent manner, he was shot and killed immediately.

However, the Portuguese described Cabral’s assassination as “a grave and condemnable act” and denied any complicity in it. After he was apprehended, Cabral’s killer confessed to the crime and that he was working for the Portuguese.

According to Kani, Portugal would grant independence to a black government in Guinea-Bissau on the condition that the rebels kill Cabral and disrupt the PAIGC.

After the assassination of Amílcar Cabral on January 20, 1973, an estimated 100 rebel soldiers and officers of the PAIGC, who were accused of the conspiracy, were killed. Afterwards, Cabral’s half-brother, Luís Cabral, who was not highly regarded within the ranks of the PAIGC, became the leader of the Guinea-Bissau faction of the movement and subsequently became the country’s first President when Portugal granted full independence to Guinea-Bissau on September 10, 1974, after 111⁄2 years of armed struggle.

Cabral’s assassination came before the independence of Portugal’s African colonies. Thus, he died before he could see his beloved countries of Cape Verde and Guinea-Bissau gain their independence from the Portuguese.

Amílcar Cabral’s assassination is one of a long line of important assassinations of African leaders by the West in order to maintain its political and economic control in the continent.

Other than being a revolutionary leader and hero, Cabral has been highly regarded internationally as one of Africa’s most prominent philosophers of the 20th century whose influence resounded far beyond the African continent.

Cape Verde’s major airport – Amílcar Cabral International Airport, is named in his honour. Also, the only public university in Guinea-Bissau, Universidade Amílcar Cabral, is named after him.

Amílcar Cabral was the second anti-Portuguese leader to be assassinated after Mozambique’s Eduardo Mondlane was killed in February 1969. They both shared the same ideology. They were both killed at 48.

These killings would not stop as another anti-Portuguese revolutionary leader would be killed in a plane crash in 1986. His name? Samora Moises Machel. You can read more about him here.

A History of Great Zimbabwe: The Rise and Fall