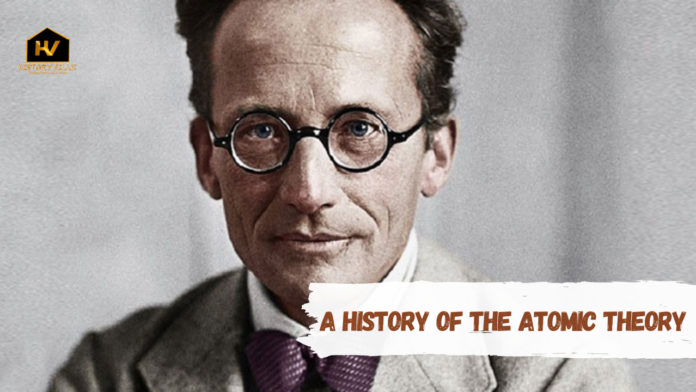 Although an atom originally meant a particle that cannot be broken down into smaller particles, it is made up of various subatomic particles. Most importantly, the proton, neutron, and electron.

Ancient History of the Atom

Democritus (460–370 BC), a Greek philosopher, was the first person to use the word atom or atomos (in Greek), which means indivisible or unbreakable, to describe the smallest particle of any substance. He believed that atoms were too small to be seen.

Philosophers are not scientists neither do they test their ideas. Instead, they use reasoning to back up their beliefs. To them, human reasoning was superior to experimentation.  Democritus created the first atomic model (a round sphere with no electrons, protons, or neutrons). His contribution helped people with understanding the idea of an atom and helped other scientists a further look into the science of the atom and its generic makeup.

The famous philosopher, Aristotle (388–322 BC), who also lived at that time, postulated that all matter was made of only four elements- Earth, Air, Water, and Fire.

Due to a lack of evidence and experiments, their views on what atoms look like and how they behave were incorrect. Its actual existence was not established until the 19th century when the idea was accepted and refined by scientists. So, for the next two thousand years, the world depended on the theories of Democritus and Aristotle, until the year 1808, when John Dalton came up with the Modern Atomic Theory.

John Dalton (1766–1844), an English Chemist, put forward a theory to describe the nature of the atom. The atom is now considered to be the basic unit of simple substances or elements. He was a schoolteacher who performed many experiments on atoms. His atomic theory had five statements:

2. Atoms can neither be created nor destroyed.

3. Atoms of one element are all the same.

4. Atoms of different elements are different.

The really awesome thing about Dalton’s model of the atom is that he came up with it without ever seeing the atom! He had no concept of protons, neutrons or electrons. His model was created solely on experiments that were macroscopic, or seen with the unaided eye.

Although the two theories that proposed atoms couldn’t be divided were not true, John Dalton added significantly to the developments of atomic theory, and would greatly influence J.J. Thomson in his own.

Joseph John Thomson (1856–1940), a son of an English bookseller, had wanted to be an engineer and was already admitted in college at an unusual young age of 14 to study engineering. But in 1873, his father died and due to lack of funds changed his major to physics.

In 1897, as Cavendish Professor of Physics at Cambridge, Thomson discovered the electron which he had originally named as corpuscle. He was also the first scientist to show that the atom is made of other smaller particles and ended up contributing to more than the atomic theory. He helped to indirectly create the television and the computer.

Using his research on Cathode Ray Tube technology, Thomson showed that when a potential difference of 5000 volts was applied across a glass tube containing a gas at a very low pressure of about 0.0001 atmospheric pressure, the tube began to glow. When the potential difference was increased to 15000 volts, a bright green glow appeared on the glass.

Thomson was able to prove that the glow was due to some kind of rays which travelled in straight lines from the cathode. He called these rays, cathode rays, which showed that they are composed of only negatively charged particles which he called electrons, because they are attracted by the positive plate of the tube and repelled by the negative plate of the same tube. Hundreds of years earlier, Dalton had proposed that atoms were neutral, solid spheres but Thomson’s experiment disproved Dalton’s theory.

In 1898, Thomson proposed his model of the atom, which advocated that electrons and protons were haphazardly placed all through the atom. He called the theory, the Plum Pudding Model. This theory was not accurate, but subsequently led to the discovery of the nucleus, made by Ernest Rutherford.

Ernest Rutherford (1871–1937), a New Zealander, was the second of eleven children born to his parents. After college he travelled to England to work as a researcher at the University of Manchester. He was a student of J.J Thomson.

In 1911, Rutherford, along with Hans Geiger (1882–1945) and Ernest Marsden (1889–1970), conducted the gold foil experiment using Thomson’s model as reference. In order to find out what is inside an atom, they used positively charged particles called alpha (α) particles from a radioactive source to bombard the atom (a thin gold foil). They found out that most of the alpha particles followed a straight path through the gold foil, some of them were scattered through wide angles while a few were even scattered in the backward direction.

Studying the experimental results, Rutherford proposed a nuclear theory of the atom which states that atom consists of a positive core called the nucleus, where most of mass of the atom is contained and electrons which move round the nucleus.

In 1913, Niels Bohr (1885–1962) proposed his theory of the atom using the Quantum Theory. Agreeing with Rutherford’s model of the atom, he suggested that electrons are arranged in up to seven specific energy levels and that each spectral line is caused by an electron.  Bohr postulated that circular orbits of the electrons were quantized (orbiting of electrons at certain specific energy levels within the atom).

Bohr determined that different energy levels could be found by using mathematical formulas, which measured the wavelengths of the different energy levels. He also went on to suggest that electrons would only occupy the lowest possible energy level on the respective level they were on. Moreover, electrons would only move up a level (increasing energy) if the lower levels were full. Bohr’s model was not entirely correct but it would lead to Schrödinger’s idea of the modern atomic model.

In 1926, Erwin Schrödinger (1887–1961) introduced the Wave Mechanics Model which describes the behaviour of the tiny particles that make up matter in terms of waves. Schrödinger formulated the Schrödinger wave equation to describe the behavior of electrons (tiny, negatively charged particles) in atoms. He developed the equation which is used today to understand atoms and molecules.

The complex mathematics behind Schrödinger’s wave equation makes it extremely difficult to solve for any system more complicated than a hydrogen atom, which has only one proton and one electron.

In 1932, James Chadwick (1891–1974), a student of Rutherford, discovered a sub-particle of atom called the neutron through the bombardment of a thin sheet of beryllium with alpha particles. The neutron carried no charge and its discovery indicated that the atomic nucleus was made up of protons and neutrons. It also explained the existence of isotopes of an element.

Further experiments pertaining to the atomic theory are still being carried out by scientists with the hope of new ideas, theories and evidences being introduced. The scientific world is looking forward to seeing more scientists unravel more mysteries concerning the model of the atom and subsequently the modern atomic theory.

The atom is made up of three main sub-particles – electrons, protons, and neutrons with positive, negative, and zero charges respectively.

An atom consists of a positively charged core called the nucleus, where most of the mass of the atom is contained and electrons which move around the nucleus.

When an electron is excited, it will jump from a level of lower energy to a level of higher energy.

The Wave Mechanics Model of the atom makes the electron elusive and indicates a region around the nucleus called an orbital.

Werner Forssmann: The Nobel Prize winner who “touched his own heart”

How Jabir Ibn Hayyan became the Father of Modern Chemistry