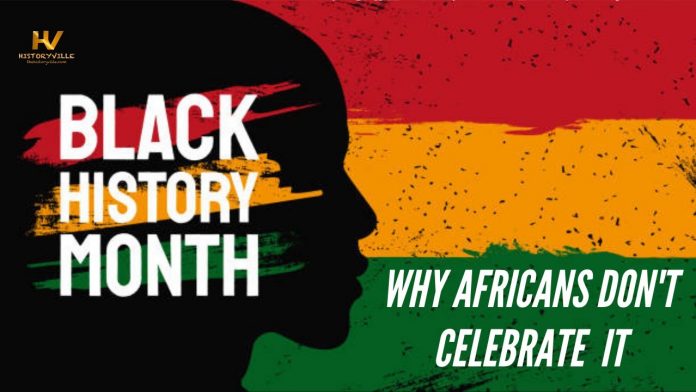 You can watch the video here…

Origin of the Black History Month

Black History Month has become one of the most celebrated cultural heritage months of the year. Schools and businesses offer Black-history-themed meals, lectures, plays, and quizzes while major brands roll out clothing, television specials, and content for consumers.

It all started in 1915 when Carter Godwin Woodson, who is now known as the “Father of Black History,” and minister Jesse Edward Moorland founded the Association for the Study of Negro Life and History, now known as the Association for the Study of African American Life and History. This group focused on researching the advancements made by people of African descent and, in 1926, they sponsored the first Negro History Week, which is now known as Black History Month.

Woodson, whose parents were enslaved, was an author, historian, and the second African American to earn a PhD at Harvard University in 1912 after W.E.B Du Bois.

It is important to note that the Negro History Week was not conceived in a vacuum. The 1920s saw the rise in interest in African American culture that was represented by the Harlem Renaissance, an intellectual and cultural revival of African American music, dance, art, fashion, literature, theatre, and politics centred in Harlem, Manhattan, New York City, which extended into the 1930s. It was also known as New Negro Movement.

Through Negro History Week, Woodson hoped to draw on this imagination and pique interest even further. He had two objectives: One was to use history to remind White America that Black people had played major roles in the founding of the nation and, as a result, needed to be treated fairly as citizens.

His other aim was to raise the consciousness of Black life and history at a time when few newspapers, books, or universities paid attention to the Black community but concentrated on the negative.

By honouring heroic Black people, Woodson wanted to illustrate the African American’s values, with the expectation that the Negro History Week will act as a vehicle for racial change permanently.

This decision was met with an enthralling response by the black community that it prompted the creation of Black History clubs and an increase in interest among teachers.

But why did the fathers of Black History Month choose February?

Why Is Black History Month Celebrated in February?

Also, February 1 is National Freedom Day in the United States, the anniversary of the approval of the 13th Amendment, which abolished slavery in 1865.

President Abraham Lincoln signed the 13th Amendment to the United States Constitution on February 1, 1865, freeing all slaves in the United States. Although, it would take until later before the states ratified it.

Major Richard Robert Wright Sr., who was enslaved and became a civil rights advocate and author, felt that all Americans should have a day to remember their freedom. Wright invited national and local leaders to meet in Philadelphia to devise arrangements to set aside February 1 each year to celebrate the signing of the 13th Amendment to the United States Constitution.

In Canada, Black history has not always been celebrated or highlighted. There is little mention that some of the loyalists who came to Canada after the American Revolution and settled in the Maritimes were people of African descent, or of the many sacrifices made in wartime by soldiers of African descent as far back as the War of 1812.

In February 2008, Senator Donald Oliver, the first Black man appointed to the Senate, introduced the Motion to Recognize Contributions of Black Canadians, and February as Black History Month. It received unanimous approval and was adopted on March 4, 2008. The adoption of this motion completed Canada’s parliamentary position on Black History Month.

When Black History Month first started in the United Kingdom, there was a big focus on black American history. Over time, there has been more attention on black British history and key black figures from the UK. A broad range of topics is covered, from Britain’s colonial past to migration and music.

Black History Month in the UK was first celebrated in London on October 1, 1987, as part of the African Jubilee Year. The event marks the contributions of Black people throughout history and the contributions of African, Asian, and Caribbean people to the economic, cultural, and political life in the UK. Over the years, there have been growing calls from campaigners for black history to be included in the curriculum in England – and not just celebrated in October.

The Relevance of Black History Month

As a matter of fact, the indifference of African immigrants to Black History Month is related to the fact that it tends to ignore African history in favour of an emphasis on African American history, especially in recent years. Thus, these Africans don’t see themselves represented in this history.

Except for South Africa which suffered White domination and supremacy until 1994, coupled with the suppression of South African history by the colonialists, African countries are not really keen on celebrating the event.

However, the relevance of Black History Month cannot be underestimated.

In conclusion, Black History Month will allow and encourage people to learn about and celebrate the contributions of the African Diaspora throughout the world. The event will also educate, entertain, and inform the public about black history.

To Woodson, what started as Negro History Week 95 years ago, is now a global annual event that is essential for young African Americans to understand and be proud of their heritage. To be Black…and proud!

How Argentina Had Five Presidents in 12 Days in December 2001

Was Fidel Castro a Friend of Africa?

How the United States Erased Its Native Americans from History

Was Abraham Lincoln Killed Because He Freed Black Slaves in 1863?