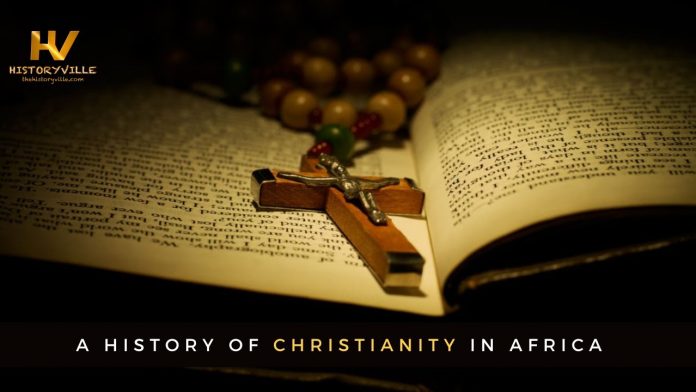 Since antiquity, Africa had been a continent largely involved in indigenous religious practises. But with the advent of Christianity, the continent experienced a rapid invasion of the religion over centuries and has currently become the continent with the largest Christian population in the world.

Termed in Christian theology as “The Great Commission”, the historic order written in the Bible and given by Jesus Christ, served as the momentum for the widespread adoption of the religion across the globe and Africa was not left out.

The religion which was said to have started in Ancient Palestine, with just over a hundred disciples after the death and resurrection of Jesus Christ, has now grown to a population of almost three billion people worldwide.

How Christianity Came to Africa

The earliest account of Christianity in Africa is found in one of the books of the Holy Bible. The story revolves around a prominent Ethiopian eunuch on a journey who encounters one of the disciples of Jesus Christ. The disciple, Philip, preaches to and converts the eunuch and baptizes him in the River Jordan. Although there are no confirmed reports that this eunuch became an evangelist, many believe he took the religion to Africa and sowed the first seed of Christianity.

However, the spread of Christianity in Africa is mostly attributed to Mark the Evangelist who is reported to have brought the religion to Alexandria, Egypt. It would be surprising to note that the northern region of Africa which is now predominantly Muslim was the first port of call for the introduction of Christianity to the continent. It was in Alexandria, a city in Egypt, that the first seeds were sown.

Alexandria became a major point in the development of Christianity in Africa, with Mark leading the movement as a bishop. In Alexandria, systems and structures were put in place to foster the growth of the Christian community there. Notable schools were also established in the city such as the Catechetical School of Alexandria which was founded in the latter part of the second century by Clement of Alexandria. This school became a centre for intense literary study and interpretation of the Bible.

Alexandria also produced many notable scholars such as Titus Flavius Clement, popularly known as Clement of Alexandria, and Tertullian, who was known as the Father of Western Theology.

At the time of the growing Christian community in Africa, North Africa was largely under Roman rule. This influenced the language that was used to spread Christianity in the region which was Latin. The first African pope, Victor I presided over the Roman Catholic Church from 189 to 198 A.D. Victor the first was the pope who established Easter to be on a Sunday and made Latin the official language of the church.

Factors that led to the spread of Christianity in Africa

Colonisation played a major role in the spread of Christianity in Africa. As European countries began to take charge of different African regions, they also began to influence the locals in the religious aspect too. Their resistance to the colonial masters did not deter them but paved the way for more forceful tactics which would ensure that the religion spread. Communities and their leaders were persuaded and converted by the Christian missionaries.

The Portuguese tried to introduce Catholicism to sub-Saharan Africa in the 15th century but it wasn’t well-received. The Kongo Kingdom, now in modern-day Congo, was a pivotal area that enhanced the massive growth of Catholic Christianity in the 18th century which was also not long-lived.

The 18th century also saw Africa witness a major inflow of Christian missionaries from the western world who started evangelical work that actually yielded results. When the West African trade routes began to get established in the 15th and 16th centuries, it also brought about not just goods but also religious influence. Traders from Europe who interacted with the indigenes also introduced Christianity to them. Although this influence was mainly exerted on the shorelines, the colonial expedition of the European countries would see that the religion spread to other interior parts of the continent.

Asides from the commercial relationships that brought colonisation to Africa, missionaries have been termed agents of colonisation as well. Christianity came with not just the good, but the bad and the ugly. Although it brought civilization, education and lifestyle upgrades, it also introduced the menace of the slave trade.

The colonisation of Africa served as an avenue for the Europeans to loot the continent’s resources without hesitation. The development and civilisation that Christianity brought were tainted with the agenda of repressing many African cultures and indigenous practices which the indigenes tried to resist. These were the many ‘battles’ that the pioneers of the religion had to fight in Africa before Christianity would be established.

For over two centuries, the African church fought against the evils of the slave trade, racism, and colonial imbalances. But with time, indigenes began to take leadership positions from the westerners thereby growing the church immensely. During this time, Samuel Ajayi Crowther became the first African bishop of the Anglican Church. This led to the call for reforms and localisation of church systems and culturalization which led to the birth of the African Independent Churches.

African Independent Churches were formed when the indigenes could no longer deal with the imposing doctrines preached by the foreign missionaries. African leaders in these churches decided to break out and form theirs. So many reasons spurred these movements such as political agenda, cultural challenges, and so on. These churches were headed by the indigenes themselves and are said to have introduced a fusion of Christianity with indigenous traditional practices.

African Independent Churches which emerged in the 19th century helped to put the religion in proper context for the Africans as they could not initially relate to European missionaries imposing beliefs and doctrines. Christianity was considered a “white man’s religion”, Jesus Christ was portrayed as the “White Saviour” and the Bible was seen as “the white man’s Bible.” Schools that were built and managed by the missionaries taught about western culture and language, so much so that it influenced dressing patterns in churches and workplaces up to this day.

The African Independent Churches also arose to fight against the suppression of cultural beliefs and practices. In recent years, these churches have expanded immensely leading to the rise of both Pentecostal and Orthodox churches in the continent with Southern and Western Africa at the forefront.

The Persecutions of Christians in Africa

Christians faced persecution even at the infancy stage of Christianity in Africa. Because of diverse scriptural interpretations, many believed that religion was a means of rebelling against their masters. During the third century, the Roman empire was the ruling power over many regions including Ancient Egypt. The Roman leaders saw Christianity as a hindrance to their hold on the people. This supposed threat led to many persecutions within the church. As such, it was not practised publicly for a long time. Nevertheless, it kept growing rapidly underground.

In the 4th century, it eventually became public with the officialisation of Christianity as a religion by King Ezana of Aksum, a land known to have existed in ancient Ethiopia and Eritrea. This helped Christianity spread even further and gave birth to the Ethiopian Orthodox Tewahedo Church. The Tewahedo Church currently has about 40 to 50 million members.

In East Africa, Kenya to be precise, the British colonial masters also tried to clamp down on the churches headed by indigenes. This was due to the Mau Mau uprising in the 1950s where patriots tried to rebel against the colonial impositions of the British. The Kenyan Orthodox Church suffered great persecution as leaders and members were imprisoned with the churches and schools shut down.

The Impact of Missionaries on African Christianity

Droves of missionaries were sent to Africa in a bid to Christianize the continent. These missionaries had a tremendous impact, but the people who did the major work were African slaves who had been sold and moved to the European world.

Many of these slaves fought in the American Revolutionary War and returned to their continent as missionaries. Perhaps, the similarities between them and their intended converts helped breach the gap and made it easy for them to evangelise to native Africans. The black missionaries helped to translate the Bible into languages the people could understand. They shared a common ground of having experienced domination by the whites and this helped the reception of the religion.

The Catholic Church was not also left out of this religious invasion as they sent out their missionaries to the continent in large numbers in the 19th century. These missionaries brought development and civilisation to the continent with the introduction of schools, hospitals, social amenities, and so on. Countries like Kenya and Uganda also grew exponentially as the number of Christian converts increased in the 19th century. However, Nigeria has the largest Christian population in Africa – about 87 million people.

The Present State of Christianity in Africa

Although North Africa was the forerunner of Christianity, it is now a predominantly Muslim region due to the wave of Islam that swept through the area in the seventh century which started with the Muslim conquest of Egypt in 639.

Countries such as Nigeria, South Africa, Kenya, and Uganda have also advanced this movement by establishing churches with mammoth crowds. Africa is now the continent with the largest Christian population in the world with a number totalling about 631 million worshippers and is projected to increase in the coming years.

Chiorazzi, A. (2015, October 6). The Spirituality of Africa. The Hazard Gazette. Retrieved from https://news.harvard.edu/gazette/story/2015/10/the-spirituality-of-africa/

Coffman, E. (n.d). What does history say about the first Christians of Africa? Christianity Today. Retrieved from https://www.christianitytoday.com/history/2008/august/what-does-history-say-about-first-christians-of-africa.html

Oganga, J. (2021, April 14). Christianity in Africa is not a Colonizer Religion. Religion Unplugged. Retrieved from https://religionunplugged.com/news/2021/4/14/christianity-in-africa-is-not-a-colonizer-religion