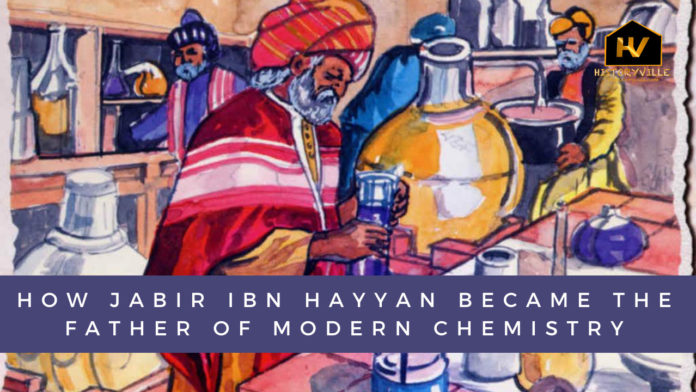 Most students of Chemistry may be unfamiliar with the name Jabir ibn Hayyan not to talk of knowing him as the father of modern chemistry. However, ibn Hayyan was not just a chemist, he was also an alchemist; a polymath, an engineer and physicist, an astronomer and astrologer, a geographer, philosopher, physician, and a pharmacist.

Jabir ibn Hayyan’s greatest legacy was the use of experimentation in chemistry. The scientist is credited with using more than 20 types of now currently common chemical laboratory equipment, including the alembic (an apparatus, mostly made of glass, used for distilling in alchemy) and retort stand, as well as explaining other chemical processes, including crystallisation and distillation.

He is thought to have also invented aqua regia, a combination of hydrochloric acid and nitric acid that has the potential to dissolve gold, in the course of helping explain the hunt for the philosopher’s stone by the alchemists. Jabir ibn Hayyan also incorporated numerous technical Arabic words, such as alkali, into the scientific language.

Jabir ibn Hayyan recognised that experiments were important to science and transformed the spiritual practice of alchemy into what would now be known as modern chemistry.

Interestingly, Hayyan supported a revolt against the ruling Umayyads and moved to Tus where his son Jabir was born. His name would be later Latinised as Geberus by the Europeans and now known as Geber in the English language. However, the Umayyads caught Al-Azdi and executed him which prompted his family to flee to Yemen where the young Jabir studied under the scholar Harbi Al-Himyari.

When the Abbasids dynasty began to rule Kufa, ibn Hayyan returned to the city where he reportedly became a student of Jafar al-Sadiq and studied astronomy, chemistry (alchemy), medicine, pharmacy, and philosophy. He later wrote that Al-Sadiq taught him everything he learnt in alchemy from calcium and evaporation to distillation and crystallization.

Jabir ibn Hayyan also referenced the work of Egyptian and Greek alchemists like Zosimos of Panopolis, Democritus, Hermes Trismegistus, and Agathodaemon. Plato, Aristotle, Galen, Pythagoras, and Socrates, were his influence on philosophy.

The Persian became the court alchemist during the rule of Caliph Harun al-Rashid. He also worked as a physician for the Barmakids, who were the Caliph’s viziers, that is, grand ministers, who counselled the Caliph. Through this connection with these Persian families, Jabir ibn Hayyan was able to practice science at the highest level. Unfortunately, his connection to the Barmakids would prove costly as we would know later.

Alchemy and Chemistry in Medieval Islam

The modern English word alchemy comes from the Arabic word al-kīmiyā and many of the fundamentals for alchemy in the Occident, that is, Western nations, were laid down by the Arabs. Other authors trace its roots to the Egyptian word kēme which means black earth. Alchemy is more concerned with the transformation of matter, with a particular attempt to convert base metals into gold or an elixir of immortality.

However, chemistry dates back to around the 1600s to the 1700s. In comparison to today’s scientific standards, it would be practically impossible for chemistry to be practiced then. This means that chemists of that period did not painstakingly look for a critical description of chemical symptoms. Thus, the study of chemistry before the 17th century was called alchemistry or alchemy.

Nevertheless, some scientists believe chemistry was an evolution of alchemy and that Islamic alchemistry, which Jabir ibn Hayyan was famous for, was a foundation for the modern study of chemistry.

What did Jabir ibn Hayyan discover?

Jabir ibn Hayyan’s contributions to chemistry cannot be overemphasised. He stressed systematic research, liberating alchemy from superstition and transforming it into a science. He is credited with the development of many types of now-basic chemical laboratory equipment and with the discovery and explanation of many now-common chemical compounds and processes – such as hydrochloric and nitric acids, crystallisation, and distillation – that have become the basis of today’s chemical engineering and chemistry.

Ibn Hayyan is also credited with the invention and development of many chemical instruments still in use today, such as alembics, which have made distillation simple, safe, and effective. He discovered hydrochloric acid (from salt) and nitric acid (from saltpeter) by distilling different salts along with sulphuric acid.

The Persian chemist also discovered aqua regia by mixing the two, that is, hydrochloric acid and nitric acid, one of the few substances that can liquefy gold. This discovery, in addition to its obvious applications to gold extraction and purification, would fuel the dreams and desperation of alchemists for the next thousand years. The discovery of citric acid (the sour component of lemons and other unripe fruits), acetic acid (from vinegar), and tartaric acid is also credited to him.

Jabiri ibn Hayyan applied his scientific expertise to the development of many industrial methods, such as the production of steel and other metals, the prevention of corrosion, the engraving of gold, the dyeing and waterproofing of silk, leather tanning, and the scientific study of pigments and other substances.

In glassmaking, the Persian scientist pioneered the use of manganese dioxide to counteract the green tinge created by iron — a process that is still used today. Ibn Hayyan recorded that boiling wine released a flammable vapour which paved the way for the discovery of ethanol.

Ibn Hayyan’s alchemy papers were translated into Latin during the Middle Ages and became traditional texts for European alchemists. Many technical words, such as alkali, introduced by Jabir ibn Hayyan, have made their way into various European languages and have become part of scientific vocabulary.

Some writers say Jabir ibn Hayyan was a prolific writer who authored about 300 philosophy books, 1300 books on mechanical devices, and hundreds of alchemy books. This very large body of Arabic writings, many of which are highly enticing, passes under his name. However, these books might not have been written by Jabir ibn Hayyan himself, but rather being added by his students or disciples.

During the medieval period, many of those books were translated into Latin. Among his other important books on the noble art of alchemy was Kitab al-Zuhra (Book of Venus). Jabir ibn Hayyan dedicated this book to Haroun Al-Rashid the Abbasid Caliph. His scientific works, including his Kitab-al-Kimya (Book of Chemistry), Kitab Al Sabe’en (The Seventy Works), have also been translated into Latin and other European languages. For several centuries these translations have been popular in Europe, and have influenced the development of modern chemistry.

Chemistry historian, Erick John Holmyard praised Jabir ibn Hayyan for transforming alchemy into an experimental science, and he argued that the importance of the Persian scientist to the history of chemistry is comparable to that of Robert Boyle and Antoine Lavoisier.

The works of Jabir ibn Hayyan paved the way for most of the later Islamic alchemists, including Muhammad ibn al-Razi, Mu’ayyad ibn Ali al-Tughrai, and Al-Hafiz Zain al-Iraq, who lived in the 9th, 12th, and 13th centuries respectively. His writings had a strong influence on the European alchemists of the Middle Ages and explained their quest for the philosopher’s stone, a sign of the process by which the baser metals such as lead and tin could be turned into gold. Yet, they have also provided a new source of essential and realistic chemical information for medieval investigators.

In 803 A.D, the Barmakids fell from the favour of the Caliph Harun al-Rashid after 17 years and many of the noblemen were either imprisoned or executed. Their fall was sudden as it was brutal. Thus, Jabir ibn Hayyan was placed under house arrest in Kufa where he continued working in his laboratory, the ruins of which were discovered 200 years after his death in 815 A.D. He was 94.

Werner Forssmann: The Nobel Prize winner who “touched his own heart”

A History of the Atomic Theory: From Democritus to Schrödinger