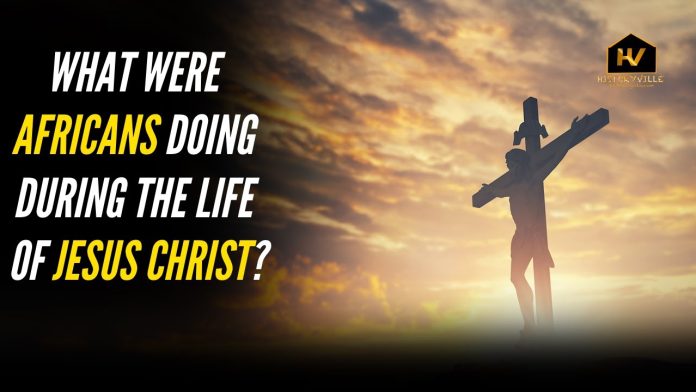 Jesus Christ of Nazareth lived from around 6 B.C. when Augustus Caesar was Emperor of Rome to around the year 30 A.D. when Tiberius had been Emperor for 16 years.

As a first-century Jewish preacher and religious leader, Jesus Christ is the central figure of Christianity, the world’s largest religion, which is also widely practised in Africa. As a matter of fact, Jesus Christ lived in Africa for a few months as an infant child.

In this article, we shall take a look at what Africans were doing during the life and time of Jesus Christ.

We begin with North Africa – Egypt to the precise.

When Jesus was a newborn child around the year 4 B.C., his father, Joseph was told in a dream to flee Israel for the North African country of Egypt in order to escape the command of King Herod the Great to slaughter children in and around Bethlehem.

Jesus Christ and his parents lived in Egypt until after the death of Herod in 4 B.C. when Joseph again had a dream that it was safe to return to Israel.

During Jesus’ stay in Egypt, the North African country was under the Roman Empire having fallen 26 years before following the death of Cleopatra VII and her son Caesarion in 30 B.C. The Roman Empire then declared Egypt a province that was to be governed by a prefect selected by the Emperor to prevent interference by the Roman Senate.

The Roman prefect who governed Aegyptus, as Egypt was then known, was Gaius Turranius. Turranius was governor over Egypt for three years – from 7 B.C. to 4 B.C.

As the of Egypt usually held the office for three or four years, a total of nine governors, including Turranius ruled Egypt during the lifetime of Jesus Christ.

The main Roman interest in Egypt was the reliable delivery of grain to the city of Rome. As Egypt was the wealthiest overseas province of the Roman Empire, Roman administrators made no change to the system of government they had met in place, nor did they desecrate Egyptian temples, religion, and customs, to ensure continued delivery of these grains.

Since Romans did not settle in Egypt in large numbers, culture, education and civic life largely remained Greek throughout the Roman period. And the Romans, like the Ptolemies, respected and protected the Egyptians, while gradually introducing the cult of the Roman state and the Emperor into the panoply of deities that the Egyptians recognised.

The Romans would rule over Egypt until the fall of the Roman Empire and the invasion of the Arabs in 639 A.D.

Due to pressure from Assyrians and Egyptians, Meroë became the southern capital of the Kingdom of Kush in present-day Sudan. During the time of Jesus, Meroë flourished and many building projects were undertaken.

The Kingdom was ruled by Queen Amanitore from 1 B.C., when Jesus Christ was about five years old, to 20 A.D. and her successor Queen Amanitaraqide from 21 A.D. to 41 A.D. These queens have been described as warrior-queens who led forces in battle.

Given the dates of her reign as queen, Amanitaraqide appears to be the subject of a brief reference in the New Testament of the Bible in the story about the conversion of the Ethiopian eunuch in Acts 8:26–4.

During this period, these Africans were restoring temples that had been destroyed by the Romans and building reservoirs to retain water for their use. In fact, the most prosperous time in Meroitic history was during the time of Jesus Christ when more than two hundred Nubian pyramids were built.

Not far from the Nubia Kingdom of Kush was the Kingdom of Aksum or Axum, an ancient kingdom centred in present-day Eritrea.

The Kingdom of Aksum existed from around the year 80 B.C. to 825 A.D. but attained its prominence by the 1st century A.D., the same time Jesus Christ walked the earth.

During this period, Aksum became a major player on the commercial route between the Roman Empire and Ancient India.

The Aksumite rulers facilitated trade by minting their own Aksumite currency and also regularly entered the politics of the kingdoms on the Arabian Peninsula. Aksum eventually extended its rule over the region with the conquest of the Himyarite Kingdom and became one of the four great powers of its time, the others being Persia, Rome, and China.

During the time of Jesus Christ between 1 A.D and 40 A.D., a remarkable West African civilisation called the Nok culture thrived in what is now Northern Nigeria.

The Nok civilisation itself started around 1500 B.C and was the first complex civilisation in West Africa. As a matter of fact, it flourished at the same time as the New Kingdom of Ancient Egypt (1580 – 1080 B.C.).

The Nok were an extremely advanced society, with one of the most complex judicial systems of the time, and the earliest producers of life-sized terracotta in the Sub-Sahara. Archaeologists have also found rock paintings and iron implements, including fearsome spear points, bracelets, and small knives.

The Terracotta Statues of the Nok civilisation are by far the most enigmatic and intriguing aspect of the Nok Culture. The statues have been described as “extraordinary, astonishing, ageless, timeless, and almost extraterrestrial”.

The construction of life-sized statues isn’t the only evidence of the advancement of their society. Research has also revealed that the Nok people had a highly developed system of administration to ensure law and order.

It is a known fact that the Nok’s judicial system pre-dates the western judicial system. The Nok people created classes of courts used for adjudicating cases from minor civil cases, such as family disputes and false allegations, to criminal cases such as stealing, murder, and adultery.

The court was presided over by the Chief Priest and various clan heads. Anyone found guilty was fined goats and chicken for sacrifice to the gods and local wine for the chief priest. The town would then declare a day of celebration on which the people would thank the gods for their graces in successfully resolving the issue and averting doom for the people.

Down south of the Nok was the Kingdom of Igodomidogo, which would later be known as the Benin Kingdom in present-day Southern Nigeria. Their ruler was called Ogiso, that is Ruler from the Sky). Thirty-one of these rulers are known until the emergence of Oba Oranmiyan in the 13th century A.D.

However, during the time of Jesus Christ, two famous rulers reigned; Ogiso Igodo and Ogiso Ere.

Around the year 40 B.C., Igodo, an ambitious, young, and smart man, staged a coup and abolished the Ik’edionwere, an inter-community Council that was set up to take decisions and settle differences between communities. Subsequently, he declared himself Ogiso and set up the Odibo-Ogiso group to help him consolidate his authority.

Setting up his capital at Ugbekun, the people of Igodomigodo enthusiastically accepted him as their ruler.

After consolidating his hold on power, Ogiso Igodo set up a Royal Council which included members of the disbanded Ik’edionwere Council and the Odibo-Ogiso group.  He proposed the idea of succession by heredity and recommended the alternative, a succession by a close relative, who is mature, wise, and acceptable to the Royal Council.

Ogiso Igodo died in 16 A.D. when Jesus Christ was around 22 years old and was succeeded by Ogiso Ere who would go on to rule the kingdom for the next 50 years.

During this time, Ogiso Ere, a lover of peace and a very resourceful king, transferred the capital from Ugbekun to Uhudumwunrun. Igodomigodo was already a sprawling and very sophisticated kingdom.

Ogiso Ere, who was the first to wear a Cowry Crown, brought his kingdom several innovations. He introduced the guild system of carpenters and wood carvers, which eventually developed into the world’s celebrated wood works and bronze casting factories in modern-day Benin City.

Ogiso Ere also built the first ever Igodomigodo market, known then as the Ogiso market.  He invented the famous African kingship paraphernalia like the Ada (a sword of honour), Eben (a sword for dancing), Ekete (a royal stool), Agba (a rectangular stool), and Epoki (a leather box).

These still serve today as the symbols of royal authority in many West African countries that experienced Bini control and influence.

Other Africans During the Life of Jesus Christ

There are other sets of African people who lived during the time and life of Jesus Christ and the list is exhaustive. For example, the area that later became Great Zimbabwe in Southern Africa was first settled around this time. The Ziwa and Gokomere communities survived by farming and mining the land which marked the earliest Iron Age settlements known of in the region.

During the time of Jesus Christ, Africans had their own lives, governments, religions, money, wars and peace. To be fair to these Africans, they simply did not know anything about Jesus Christ, whether his Virgin Birth, Sinless Life, Atoning Death, Triumphant Resurrection and Ascension into heaven. Neither did they know about His Second Coming and His millennial reign upon the earth.

Osahon, N. (n.d.). The Ogiso Dynasty (Before the Obas of Benin). Edofolks. Retrieved from https://edofolks.com/html/osahon_ogiso_dynasty.htm