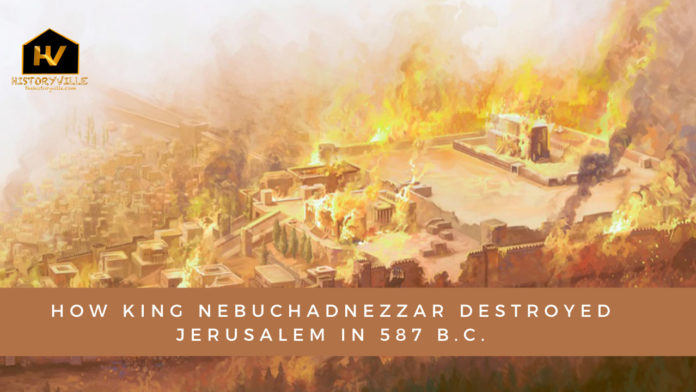 In December 589 B.C., Nebuchadnezzar, the King of Babylon, invaded Jerusalem and began a siege against King Zedekiah of Judah and the inhabitants of Jerusalem. The siege lasted for more than a year as the Jews endured the effects of the blockade. Morality among the Jews plummeted as famine set in and because of their poor state, various plagues began to afflict them.

Finally, the food supply was depleted and their misery increased, as many were reduced to cannibalism. Their resistance didn’t last for long as the Babylonians broke through the walls, pillaged, and looted the city in July 587 B.C. Many Jews were murdered.

The walls, the temple, and the whole city were razed to the ground. Those who were not slaughtered were taken as captives to Babylon. The poor ones were, however, left behind. Everything that remained of Jerusalem was ash and ruins.

But why did the Jews experience such awful suffering and devastation? How and why did the King of Babylon destroy Jerusalem? First, let’s look at the life of the man, Nebuchadnezzar.

Nebuchadnezzar is popularly known as the destroyer of Solomon’s Temple. He was also the King of Babylon. He was the son of Nabopolassar the Chaldean, who ruled over much of the civilised world from 604 to 562 B.C.

His original name was Nebuchadrezzar, which means, “O god Nabu, preserve my firstborn son.” However, when Jerusalem was sacked in 587 B.C., the Israelites made fun of the king’s name and renamed it Nebuchadnezzar, meaning “O god Nabu, protect my jackass”.

The King of Babylon is infamous for destroying the Jewish presence in the Land of Israel. He then exiled the vast majority of its citizens to Babylon, after he had desecrated and burnt the nation’s Holy Temple.

King Nebuchadnezzar II was the longest reigned and most powerful ruler of the Neo-Babylonian Empire, who allegedly built the first public museum in world history in his royal palace in Babylon and, of course, the Hanging Gardens of Babylon, one of the Seven Wonders of the Ancient World, which he built for his wife, the Median Queen Amytis because she missed the green hills and valleys of her country.

One of the greatest generals in history, King Alexander the Great of Macedonia would later die in this same royal palace, 239 years after King Nebuchadnezzar’s death, on June 11, 323 B.C.

Despite being a man of diminutive height, Nebuchadnezzar had great ambitions. He dreamt of conquering the world and made no attempt to keep it a secret. As a prince, he was frequently mocked as to how a short man could reign over the entire world.

Yet, with the ferocity of a roaring lion, Nebuchadnezzar came to power and struck terror in the hearts of the people. As his father, King Nabopolassar’s chief military officer he was no stranger to the art of war and cruelty. According to the Talmud, during his reign, Nebuchadnezzar cast such terror upon men that when he died and appeared in hell, extreme fear overwhelmed those who were there, fearing that he had come to impose his rule over them.

Nebuchadnezzar declared himself a god, “I will ascend above the tops of the clouds; I will make myself like the Most High,” Isaiah 14:14. Before long he had become the world superpower. His most fearsome general, Nebuzaradan carved the king’s image unto his chariot and trembled in fear of his master even when he was far away.

Not only was the whole human world subject to Nebuchadnezzar, Jeremiah’s prophecy put forth the surprising revelation that he was also granted authority over the animal kingdom: “Now I will give all your countries into the hands of my servant Nebuchadnezzar king of Babylon; I will make even the wild animals subject to him,” Jeremiah 27:6.

Thus, Nebuchadnezzar was said to ride on the back of a male lion as a snake was tied to its head.

During the second year of his reign, Nebuchadnezzar conquered and destroyed the fortified city of Ashkelon, after which he consolidated his authority over the land of Israel.

All the kings of Syria and Israel, including Jehoiakim of Judah, were compelled to pay tribute to Nebuchadnezzar. This was a bitter pill for Jehoiakim to swallow as he had been appointed by the Egyptian Pharaoh Necho, a sworn enemy of Nebuchadnezzar.

In 598 B.C., after three years of submission to Nebuchadnezzar, King Jehoiakim attempted to shake off the yoke of Babylon and pledge allegiance to Egypt. The revolt was suppressed and Jehoiakim was bound in chains, prepared to be taken to Babylon. However, he died a horrible death after being dragged through the streets outside Jerusalem, where his corpse was thrown. Jehoiakim’s death fulfilled the prophecy of Jeremiah:

“He will have the burial of a donkey– dragged away and thrown outside the gates of Jerusalem.” – Jeremiah 22:18-19.

After Jehoiakim’s death, his eighteen-year-old son, Jehoiachin became the king of Judah. However, the teenage king reigned for just three months as his reign was cut short when Nebuchadnezzar came down to Jerusalem. He captured all of the country’s officials and tens of thousands of others. He also plundered all the treasures of Solomon’s Temple and the King’s Palace and took them with him to Babylon.

Then Nebuchadnezzar appointed Jehoiachin’s uncle, Zedekiah to the throne, and subjugated the neighbouring empires— including Edom, Moab, Ammon, Tyre, and Sidon — to Zedekiah. His reign lasted 11 years, before he, too, conspired with the Egyptians and rebelled against Babylon, despite his promise to remain loyal to Nebuchadnezzar.

A Crushing Response to Zedekiah’s Rebellion

Nebuchadnezzar had always been cautious of conflict with Israel and its Holy Temple, as he did not believe that God would sanction the destruction of Jerusalem.

In order to establish the divine intention, Nebuchadnezzar, after he had enlisted the services of a sorcerer, fired several arrows in the direction of different nations. All the arrows he fired split, apart from the one in the direction of Jerusalem. He then perceived it as a sign that he would be victorious.

Nevertheless, he was worried that he would meet the same fate as Sennacherib, the Assyrian king who had miraculously vanquished several years earlier, so he set up his headquarters in Riblah, present-day Syria near the border with Lebanon and he sent his general, Nebuzaradan to destroy Judah.

Nebuchadnezzar warned Nebuzaradan that he would face defeat if he allowed the Jews to pray and repent of their evil ways. He also instructed him to drive them out as if they were being hunted by a lion and not to stop until they reached the rivers of Babylon.

Nebuchadnezzar barricaded Jerusalem for nearly two years and eventually breached the walls of the city in the month of Tammuz, that is, July 587 B.C.

He had arrayed Nebuzaradan with 300 mules loaded with iron axes that could cut iron. All, but one, were destroyed in an effort to open one of the gates of Jerusalem. While briefly considering the withdrawal from the city, Nebuzaradan made a final attempt with the remaining axe as the gates gave way on July 7.

On July 9, 587 B.C., Nebuzaradan then went on to destroy the Holy Temple, the palace of the King, and all its dwellings by fire. While Zedekiah initially managed to escape through an underground passage leading to Jericho, he was captured, after his soldiers had deserted him, and taken away to appear before Nebuchadnezzar at Riblah.

Once there, the king of Babylon slaughtered the sons of Zedekiah before him, blinded him, tied him in chains, and sent him as a prisoner to Babylon. Then he took King Solomon’s throne and attempted to preside over Zedekiah’s fate while sitting on it, but he was stopped from doing so.

READ ALSO: Regulus and the Great Serpent of Bagradas

When the Jews arrived in Babylon, Nebuchadnezzar spared no effort to humiliate them. He made them march down the riverbank, bound and naked, while he watched from a royal ship on the water.  Among the exiles, were Jewish youths whose beauty was so striking. Nebuchadnezzar had them executed and their bodies mutilated and trampled underfoot to prevent the Chaldean women from seeing their beauty and desiring it. A daring attempt by some 80,000 young priests to escape ended in tragedy.

The Dreams and Idolatry of Nebuchadnezzar

The stories concerning Nebuchadnezzar’s attempts to ensnare the Jews in the practice of idolatry, the insanity that followed him for seven years, his good acts towards the Jewish poor in his later years, and other narratives have been chronicled in diverse writings. You can read more about Nebuchadnezzar in the Bible book of Daniel.

The Death of Nebuchadnezzar

The prophet Daniel had been one of Nebuchadnezzar’s trusted advisors during the reign of the king and was elevated to a new place of influence because of his ability to interpret dreams.

One day, Nebuchadnezzar woke up from one of his dreams, frightened. He found himself in a dream living like a farm animal, eating grass from the field, and losing his ability to reason. He then asked Daniel for an interpretation. Daniel told him that he would quickly fall into an animal-like life and that the only way to keep his mental health from failing was to offer charity.

Nebuchadnezzar opened his storehouses and for a year gave charity to those who wanted it most, especially the recently-exiled Jews.

As the year went by, he grew resentful and closed his storehouses, thereby stopping the giving of the charity, because his mental health had shown no decline.

As long as Nebuchadnezzar lived, no man smiled. Therefore, at his death, the entire world burst forth in triumphant jubilation.

Upon the death of his father, the Babylonian advisors asked Evil-Merodach to take up his rightful place, which he declined until he was certain his father was really dead. The advisors then exhume Nebuchadnezzar’s body and then proceeded to stab the corpse repeatedly before dragging it through the streets of Babylon. This fulfilled Isaiah’s prophecy:

“But you are cast out of your grave like a rejected branch, covered by those slain with the sword, and dumped into a rocky pit, like a carcass trampled underfoot.” – Isaiah 14:19.

Avraham, Calev Ben (2011): The Book of Daniel Unsealed: Prophecy: Past, Present and Future.

Sack, Ronald Herbert (2003): Images of Nebuchadnezzar – The Emergence of a Legend.

The Death of Nebuchadnezzar (Part 20)

The Divine Justification for the Babylonian Destruction of Jerusalem

Imhotep: The Real Father of Medicine is from Africa