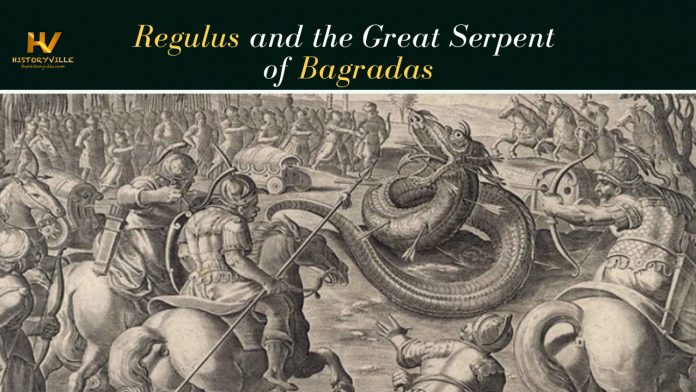 Let me tell you about the story of Regulus who encountered a large serpent during the First Punic War.

You must have been familiar with the apocryphal Hausa history of a snake (Sarki) at the Kusugu well in Daura which terrorised the citizens before it was slain by Bayyajida, a prince of Baghdad, who married Queen Daurama to establish the seven Hausa states.

Today, I shall tell you the Afro-European version which happened 2,273 years ago in Carthage, present-day Tunisia.

It was in the year 255 BC and the First Punic War had been rampant and going on for eight years. The soldiers engaged in battlefields that stretched across Sicily and the waters surrounded the island. In fact, ambushes and skirmishes extended as far as the coasts of Italy near the capital, Rome.

However, to bring an end to the fighting, the Romans decided to mount an invasion of North Africa; of course, their nearest entry point was Carthage.

This had only happened once when the tyrant king Agathocles of Syracuse had tried to invade North Africa 65 years before in 310 BC but was defeated after a two-month toilsome and perilous march. He fled the battle secretly after the defeat.

Discarding history, the Romans chose the statesman, consul, and general Marcus Atilius Regulus to lead the campaign to North Africa. Like Agathocles before him, Regulus’ army suffered a humiliating defeat at the hands of the Carthaginians who had hired the mercenary Spartan general, Xanthippus who made Regulus and his army fight on open ground, which allowed him to maximise the effect of the excellent Carthaginian cavalry and war elephants.

The ensuing battle led to the death of 12,000 Romans with 500 of them taken as prisoners of war including Regulus. That defeat stopped any chance that the Romans would defeat Carthage in Africa and the rest of the war fought at sea and in Sicily.

But before this encounter with Xanthippus, Regulus and his men met a more dangerous enemy and that is the subject of this article.

The Arrival in North Africa

General Marcus Atilius Regulus landed in Southern Carthage, in North Africa, an area which was northeast of Sicily while marching towards Carthage itself. However, their journey took them through an unfriendly route forcing them to march across the Bagradas River, present-day Medjerda River which flows from North-East Algeria through Tunisia before emptying into the Gulf of Tunis and Lake of Tunis. With a length of 450 kilometres (280 miles), it is the longest river in Tunisia.

It was at this river that they met with their mysterious foe.

According to the Roman jurist, statesman, and writer, Quintus Aelius Tubero who flourished in 11 BC, Regulus, while camping at the Bagradas River met a serpent of extraordinary size; more than the size of the Amazon’s green Anaconda. The serpent had been based in that region and Regulus and his soldiers fought a stubborn and fierce battle with it. The entire army kept attacking it with different weapons for a very long time until it was finally subdued and finally killed.

In fact, its skin was reported to be a hundred and twenty feet long which was then sent to Rome as a trophy.

Another version I can rely on comes from the Roman historian Titus Livius who was simply known as Livy in English. Livy’s Ab Urbe Condita Libri (Books from the Foundation of the City) covers the monumental history of Rome and the Roman people. The work covers the period from the earliest legends of Rome before the traditional foundation in 753 BC through the reign of Augustus in Livy’s own lifetime.

Augustus was the Roman Emperor when Jesus Christ was born in 4 BC.

Livy also flourished at the end of the first century BC through to 17 AD; the purported year of his death. In his work, he recorded that Regulus killed an abnormal and absurd serpent which killed many of his soldiers.

The dragon serpent was so huge that it denied Regulus and his army access to the Bagradas River. The serpent with its large mouth seized many of the soldiers and crushed them to death. It also killed many of them with its sharp swinging tail. In fact, the missiles thrown at it were ineffective. However, Regulus and his men finally hurled plenty of stones at it until the serpent was brought down by the weighty blows.

Corroborating Tubero’s account, Regulus and his men skinned the serpent and sent it to Rome. They were forced to decamp from the site because of the odoriferous substances the serpent had emitted.

Another version of this story was penned down by Paulus Orosius. He was a Gallaecian Chalcedonian priest, historian and theologian, and a student of Augustine of Hippo.

It is believed he might have derived his source from Livy.

Orosius was a good historian and he wrote more about Regulus’ role. The Roman general who had been chosen by lot for the Carthaginian War set out his army to attack the serpent (Orosius used the word reptile) after they had pitched their camp at the Bagrada River.

READ ALSO: The Pope who turned the Vatican into a Whorehouse

Orosius wrote that the serpent killed many of the soldiers as the javelins and darts they threw at it had no effect as they “glided off its horrible scaly fins as if from a slanting testudo of shields”. In fact, the creature suffered no injury.

When Regulus could no longer stand the loss the serpent was inflicting on his army, he ordered for ballistae to be brought up (a ballista is a catapult used in ancient warfare for hurling large stones).

A stone taken from a wall was hurled by a ballista that struck the spine of the serpent and weakened its entire body. They then proceeded to spear and skin the serpent, which had for a long time withstood so many javelins unharmed. Its skin, said to have been 120 feet long, was sent to Rome.

There are other versions of this story, some of which were told by Regulus’ soldiers who made it back to Rome. However, time will fail me to write on them all…

But if you’re interested in reading on and knowing more, you can visit here.

About the skin of the serpent, it was displayed in one of the temples in Rome before its mysterious disappearance around the year 133 BC.

Imhotep: The Real Father of Medicine is from Africa