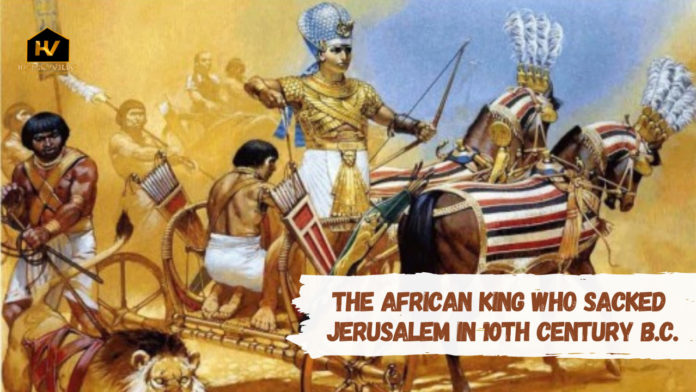 Shishak, Sheshonk I or Shoshenq, was a King of Ancient Egypt who ruled between 945 and 924 B.C. He originated from a royal Libyan lineage who had the “great chief of the Meshwesh” as their identity. They inhabited Bubastis (an ancient Egyptian city) situated along the River Nile in the Delta region of Egypt.

Shishak’s ascension to the throne was not met with much opposition or struggle. This founder of the 22nd Dynasty of Ancient Egypt arose to the throne with a solid army and treasury under his authority.

Shishak in the Bible

In the history of the Bible, Shishak was the first King of Egypt to be named in the Holy Book. He was also the first foreign king with evidence of his existence outside the Bible. Before now, the usual practice was for the Kings of Egypt to be referred to as just “Pharoah”.

Our first encounter with King Shishak is found in the book of 1 Kings 11:40 where “Solomon tried to kill Jeroboam, but he fled to King Shishak of Egypt and stayed there until Solomon died” (New Living Translation). For a vivid understanding, the events preceding this are as follows;

Whilst King Shishak reigned as king over Egypt, Solomon and his son Rehoboam simultaneously ruled over Israel. Now, because Solomon had disobeyed God and performed idolatry, God vowed through a prophet, Ahijah, to take ten (10) tribes from Solomon and give them to Jeroboam who was an official serving under Solomon’s court. This upset Solomon and so he sought to kill Jeroboam. Jeroboam fled for his life and ran to Egypt where king Shishak gave him asylum.

Subsequently, we see in 1 Kings 12:1-20 that with the passing on of king Solomon, Jeroboam returned to Israel and became the leader of the northern region while Rehoboam reigned over the southern region of Judah with Jerusalem as the capital.

The Conquest of Jerusalem

Around 926 B.C., during the fifth year of King Rehoboam’s reign, the Bible records that “Shishak king of Egypt came up against Jerusalem” (1 Kings 14:25–26). He did this because they had been unfaithful to the Lord.

Shishak, according to 2 Chronicles 12: 3-4, was able to invade Jerusalem with the aid of 1,200 chariots and 60,000 horsemen, and a countless army of Libyans, Sukkites, and Ethiopians that accompanied him from Egypt. He (Shishak) conquered the cities of Judah and came as far as Jerusalem. At this juncture, the leaders and all the people had fled Jerusalem because of Shishak.

However, when the prophet Shemaiah preached to the leaders of Judah and their people they repented, Jerusalem was saved from destruction. This did not however exonerate them from servitude to Shishak nor looting of their prized possessions by him (2 Chronicles 12:8).

While in Jerusalem, Shishak went into the house of the Lord, their holy temple, and ransacked the treasury including the treasury of the royal palace. He stole everything, including but not limited to the shields of gold, that Solomon himself had made and replaced them with ones of lesser value made of brass. He committed these items to the care of the commanders of the guards who watched over the entrance to the Royal Palace.

Did Shishak take the Ark?

The Ark of the Covenant or The Ark of God as some Bible translations describe it, was a sacred treasure of the Jews. It was a core symbol of their faith as they believed it carried the presence of God. The book of Exodus describes the Ark as a gold-covered wooden chest with a lid cover containing the two tablets of the 10 commandments, Aaron’s (high priest of Israel around the 14th century B.C.), rod and a pot of manna.

There has been a lot of controversy as to whether Shishak took the Ark of the covenant to Tanis (the then capital of Egypt) after he sacked Jerusalem. Recall that the book of 1 Kings 14:25-26 mentioned above, states that when Shishak invaded the Holy temple “…He took everything, including all the gold shields Solomon had made.” The chronicler also recounted the same where he noted that “…When Shishak king of Egypt attacked Jerusalem, he carried off the treasures of the temple of the Lord and the treasures of the royal palace. He took everything, including the gold shields Solomon had made.” 2 Chronicles 12:9.

When Egypt plundered any city, part of the loot was taken to the temples in Egypt in honour of the god of Pharoah as a thank you for the success they achieved. So there exists a possibility that the ark may be in Egypt. The famous movie, Raiders of the Lost Ark sets Indiana Jones in Tanis looking for the ark.

Opponents of this school of thought believe that the Jews hid the ark and did not let Shishak take it. They hold on to this view partly because about 300 years later, another King of Judah, Josiah ordered the Levites (Jewish priests) to take the ark back to the temple of the Lord, for they had removed it from there. This is recorded in 2 Chronicles 35:3.

The most accepted logic as to why they even removed it in the first place was due to the reconstruction going on in the temple. Thus, this is a Biblical evidence that the Ark was still in Jerusalem and inside Solomon’s Temple for three centuries after the death of King Shishak.

A few others opine that the Ark of Covenant was taken to Babylon in 586 B.C. by King Nebuchadnezzar when he invaded and destroyed Jerusalem. Yet another school of thought on this issue is that by a legend who claims that King Solomon fathered a son, Menelik, by the Queen of Sheba who took the Ark back to Ethiopia.

Over the years, archaeologists have to a large extent come to terms with the fact that there exists some truth in the Bible’s account of historical events. Shishak documented his exploits of Israel on the walls of the temple of Amun in Karnak in Upper Egypt.

In the year 1926, archaeologists discovered Shishak’s cartouche (an ornate frame around a design or inscription) embedded into a stone block at Megiddo, known today as Northern Israel. This serves as proof that the Pharoah existed in that city.

The records of archaeologists would, however, show that the raid carried out by Shishak during his reign as king of Egypt was more than a mere plundering of Judah or its capital, Jerusalem. They have good reason to believe that he may not have even been in the city of Jerusalem at all.

The writings on the Karnak temple outlines the territories conquered by Shishak in Israel but does not list Jerusalem as one of them. It is argued that the reason for this could be that some names on the list have been lost due to erosion as the row with the recordings of Judah’s invasion is severely damaged.

Another theory for the non-inclusion on the list of regions conquered by Shishak is that put forward by Egyptologist, Kenneth Kitchen.

After an in-depth study of the phrases “Heights or Highlands of Davit” or “Heights of David”, he confirmed, “Davit” to be another way for spelling “David”.

Kitchen noted with the observation that Shishak’s list in the Karnak temple is arranged geographically, and the “Heights of Davit” outlined in a row which includes areas in the South of Judah and the Negev, leaves a “high degree of possibility” that Shishak claimed to have conquered an area called the Heights of David when he invaded Judah in the 10th century BC. Some experts believe this refers to the city of Jerusalem.

It is commonplace that King Solomon of Israel, spoken about in the earlier part of this article, was the wealthiest man in the Bible (2 Chronicles 9:13-28). So, if Shishak truly raided the temple and palace, he would have made away with a lot of gold, silver, etc., to Egypt.

Well, there’s proof that when Shishak’s son, Osorkon I became king, he constructed a pillar in a temple at Bubastis on which he offered about 383 tons of gold and silver to the gods of Egypt.

Subsequently, his successor, Sheshonq II, was laid to rest in a coffin made of pure silver. Questions have arisen as to where the Egyptian pharaohs came into possession of so much gold and silver. It would not be farfetched to assume they were gotten from the royal palace and the temple of Jerusalem, as well as from other cities taken in Shishak’s invasion of Judah and Israel.

Others, nevertheless attribute the absence of Jerusalem on the list to the fact that conquering the city was not a priority of the Pharoah.

Furthermore, it is believed that the inscriptions in the Karnak temple suggest that Shishak was not just a dictator who sought to merely raid regions, rather, it was a conscious effort of his to restore Egypt’s hegemony over Israel and neighbouring territories that had previously been ruled by the Pharaohs from 15 B.C.–12 B.C. He did this not just by exerting military dominance but through political and trade operations.

According to Israeli archeologist, Finkelstein, “Empires do not raid. Egypt does not raid; for Sheshonq, this was about restoring the great empire of Egypt in Canaan.”

While Shishak may not have destroyed Jerusalem, there is a high probability that this African king sacked Jerusalem by taking their gold, silver, and other precious treasures to Egypt while simultaneously making Jerusalem subordinate to Egypt.

Now when the LORD saw that they humbled themselves, the word of the LORD came to Shemaiah, saying, “They have humbled themselves; therefore, I will not destroy them, but I will grant them some deliverance. My wrath shall not be poured out on Jerusalem by the hand of Shishak. Nevertheless, they shall be his servants; that they may know my service, and the service of the kingdoms of the countries (2 Chronicles 12:7-8, KJV).

About 230 years later, another African King would invade Jerusalem; this time, to save it. But that’s a story for another day.

ChristianAnswers.net. (n.d.). What evidence has been found of the Egyptian king, Shishak? Retrieved February 2021, from https://christiananswers.net/q-abr/abr-a017.html

David, A. (2019, April 16). Mover Over Moses; A Pharaoh May Have Created The Ancient City Of Israel. Retrieved February 2021, from https://www.haaretz.com/israel-news/.premium.MAGAZINE-move-over-moses-a-pharaoh-may-have-created-the-ancient-kingdom-of-israel-1.7114102

Institute for Biblical & Scientific Studies. (n.d.). Biblical Archaeology: Where is the Ark of The Covenant? Retrieved February 2021, from https://www.bibleandscience.com/archaeology/ark.htm

Wikipedia. (n.d.). Ark of the Covenant. Retrieved February 2021, from https://en.wikipedia.org/wiki/Ark_of_the_Covenant