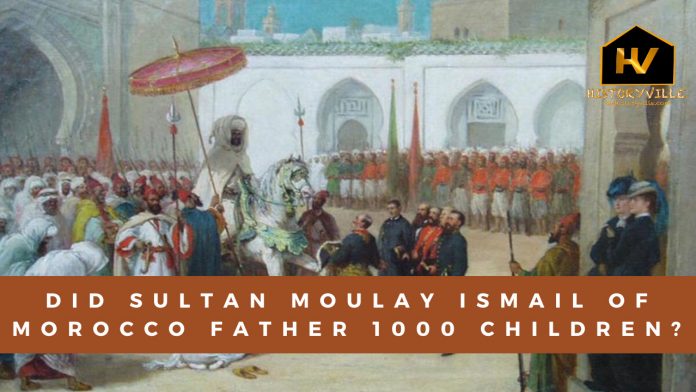 It was the French envoy Dominique Busnot who first alleged in his writings in 1704 that Sultan Moulay Ismaïl “The Bloodthirsty” of Morocco, had 1,171 children. Even the Guinness Book of World Records had proven that the Moroccan sultan had 880 children. It has also been reported that Moulay Ismail had sex every day for 32 years.

Moulay Ismail is one of the greatest figures in Moroccan culture. He inherited a nation ravaged by internal tribal wars and royal successions, but by the end of his reign he had ruled a country with a powerful army of more than 150,000 people; most of them were slaves from sub-Saharan Africa.

Moulay Ismail ensured the continued existence of his elite units by supplying women with soldiers and training their children for guard duty.

But how true are these claims? Did the Sultan really father over 1000 children? Let’s find out.

Who was Moulay Ismail?

Sultan Moulay Ismaïl of Morocco, ‘The Bloodthirsty’, was the second monarch of the Alaouite family of Morocco and reigned from 1672 to 1727.  The son of a maternal black slave, Moulay Ismail claimed to be a descendant of Prophet Muhammad, the founder of Islam. He was also described as the strongest and most vigorous man of his State.

After the death of Saadi Sultan Ahmad al-Mansur, Morocco entered a period of turmoil, during which the Sultan’s sons battled for the throne with each other, while the country was divided by the various military leaders and religious authorities.

Three rulers preceded Moulay Ismail. They were his father, Moulay Sharif, and his two half-brothers.

As the first ruler of the Alaouite dynasty in 1631, Moulay Sharif abdicated in 1636 and was succeeded by his eldest son, Moulay Muhammad ibn Sharif.

Under the reign of the latter, the Alaouite kingdom was extended to the north of the land, to Tafna and the river Draa. His half-brother, Moulay Rashid, rebelled against him and managed to kill him on August 3, 1664, in a battle in the plain of Angad.

Moulay Ismail chose to support Rashid and was rewarded by appointing him as governor of Meknes. There, Ismail devoted himself to agriculture and trade in the region in order to increase his wealth, while Moulay Rashid ruled as Emir of Tafilalt and then as Sultan of Morocco after his defeat of Fez on May 27, 1664.

Rashid also entrusted Ismail with military control of the north of Morocco and made him feudal caliph and viceroy of Fez in 1667, while fighting in the south of Morocco.

While Rashid continued his campaign against the autonomous tribes of the High Atlas, he was killed in Marrakesh on April 9, 1672, after falling off his horse.

On April 13, after he had learned of Rashid’s death, Moulay Ismail hurried to Fez, where he took possession of his brother’s treasury and, on April 14, 1672, declared himself Sultan of Morocco. He was only 26 years old. The declaration took place at about 14:00 and a grand ceremony followed.

The entire population of Fez, including the nobles, philosophers, and sharifs, vowed to be loyal to the new sovereign, as did the tribes and cities of the kingdom of Fez, who sent embassies and gifts to him. Only Marrakesh and the surrounding area did not send an embassy. Ismail set his capital at Meknes on account of the city’s water supply and environment.

The epithet ‘The Bloodthirsty’ was given to Ismail for being infamously cruel – his reign is said to have ended with the showing of 400 heads in the city of Fez, and over the next 55 years, it is estimated that he tortured and killed more than 30,000 men, not counting those who died in battle.

Ismail was also extremely protective of his four wives and 500 concubines. Any man who just looked at any one of his wives or concubines was punished by death, and any suspicion of adultery against either of the man or woman was severely punished. The women were either strangled by the Sultan himself, their breasts cut off, or their teeth pulled out.

As well as being notorious for his brutality and cruelty, so was he well-known for reportedly fathering hundreds of children and perhaps more than a thousand.

A Father of many Children

According to the Guinness Book of World Records, Ismaïl gave birth to 888 children, the greatest number of offspring for anyone in history that can be confirmed – it is no wonder that a succession struggle between his sons emerged after his death.

According to accounts by Dominique Busnot, a French ambassador who regularly traveled to Morocco, the Sultan may have had 1,171 children by 1704. At that time, Ismaïl was 57 years old and had ruled for 32 years.

While many scientists doubted that it was possible, new computer recreations suggest that he could have given birth to these many children if he had sex about once a day for 32 years.

He definitely had enough women to impregnate. As a matter of fact, the recreations revealed that he would only have needed a harem of 65 to 110 women to achieve the same outcome.

The research said that the ruler would have had to have sex between 0.83 and 1.43 times a day with the women to father so many children in 32 years.

Interestingly, while the Sultan was free to have sex with different women, any suspicion of adultery on the part of women was severely punished, as I have written above. Other men who ogled the Sultan’s women could also be punished by death.

Moulay Ismail reigned for 55 years as Sultan of Morocco until he died on March 22, 1727. He was 81. His reign remains the longest of any sultan of Morocco. What happened after his death is a story for another day.