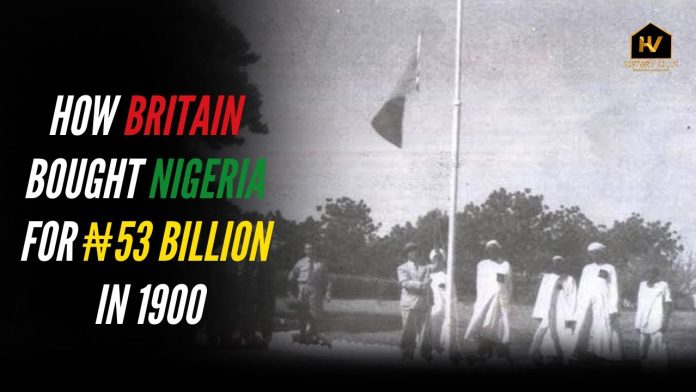 Did you know that the West African country of Nigeria was never a nation? Yea, that’s right. The country was bought and sold like a commodity by the British at the turn of the 20th century. Before you wonder and ponder on how a vast country like Nigeria could be bought and sold, let’s go back to history.

The Acquisition of Nigeria

The geographical area of what is now present-day Nigeria was once known as the Slave Coast by the European slave traders. However, by the 1870s slavery had died down.

Britain, which was the first industrialised nation in the world, had lost its appetite for slaves and now preferred palm oil. It needed the cash crop as a lubricant for its machines to maintain its status as an industrial powerhouse.

At first, most of the trade in oil palm was awkward as locals were selling to those who gave them the best deals. Some of these local chiefs, like Jaja of Opobo, became immensely wealthy due to the oil palm trade. As a result, Jaja was influential as well.

Activities of the Royal Niger Company

However, among the Europeans, there was competition among those who would get preferential access to the lucrative oil palm trade and in 1879, a British colonial administrator, Sir George Taubman Goldie (1846-1925) formed the United African Company (UAC) and effectively took control of the Lower Niger River.

By 1885, in the aftermath of the Berlin Conference, his company had acquired 30 trading posts along the Lower Niger. This monopoly gave the British a strong hand against the French and Germans and got the area the UAC operated in.

After the British had got the terms they wanted from other Europeans, they began to deal with the African chiefs. Within two years, Goldie had signed treaties with tribal chiefs along the Benue and Niger Rivers while also penetrating inland. But this move inland was against the agreements signed with the chiefs.

By 1886, the company was granted a royal charter which authorised it to administer the Niger Delta, present-day Southern Nigeria, and all lands around the banks of the Niger and Benue Rivers.

The Murder of King Jaja of Opobo

To the indigenous chiefs, the Royal Niger Company envoys had promised free trade in the region. However, behind the scenes, they entered private contracts on their own terms. Because these deceitful private contracts were often written in English and signed by the ignorant local chiefs, the British enforced them.

When Jaja of Opobo tried to export oil palm on his own, he was forced into exile for breaking his promise and obstructing commerce. However, Jaja was “pardoned” in 1891 and allowed to return home, but he died on his way back to Opobo, poisoned with a cup of tea.

How did the other chiefs react to Jaja’s death? Who was King Koko of Nembe and what was his role in bringing down the Royal Niger Company?

You can check out the answers to these questions in the video below: