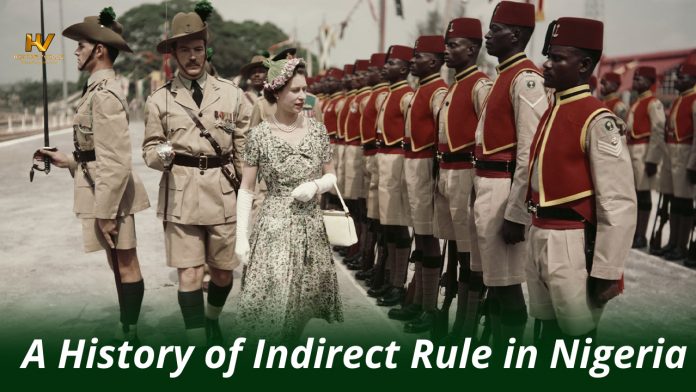 What is an Indirect Rule?

Hence, he employed the services of traditional rulers, with their traditional political system, who would rule their areas but be subject to the orders of the British administration.

Indirect rule operated thus; the British governance made the traditional rules intermediaries between them and the people and allowed the people to retain their cultures. They did this to ensure that the people see them less as intruders but as partners with the traditional institutions already in place.

It is important to note that they only did this regarding chiefs that welcomed them with open arms. Others who didn’t were either banished or killed and then replaced.

In the north, the political administration system was highly centralised and it had the full cooperation of the people. There was also a tax system already in place. Hence it was easier for the indirect rule to thrive there. The Northern Province was divided into six provinces headed by a British official known as the “Resident”. The provinces were further divided into districts that were headed by an official known as the “District Commissioner”.

Some of the factors that contributed to the success of indirect rule in Northern Nigeria are:

1.    The use of the existing traditional administration, which was centralised.

2.    The submissiveness of the people, as the emir was the absolute ruler. An autocrat that the people feared and revered. The only change was that the emirs became answerable to the British officials.

3.    The Islamic Religion which recognises obedience to traditional rulers, and finally…

A well-organised system of taxation as the money generated from the taxes was used for the running of the government by the British.

As a result of these factors, Indirect Rule thrived in Northern Nigeria and governance was pretty much straightforward.

However, in the South, it was a little bit complicated. Southern Nigeria was not as homogenous as the North. It was divided mainly into the West and East. So, how was the indirect rule in these regions?

In the east, there was no centralised system of governance. Every man was a king in his own home. With the introduction of indirect rule in Nigeria, warrant chiefs, like Ahebi Ugbabe, were introduced to rule instead and collect taxes on behalf of the British. This development was met with great resistance from the people as they didn’t see a reason to have a ruler. This resistance would later lead to a revolt – the Aba Women’s Revolt in 1929.

The West on the other hand was on a middle ground. The indirect rule was partially successful due to the checks and balances inculcated in their political system. The Yoruba Obas were not absolute like in the North, thus, they were accountable to their people. However, one thing in the favour of the indirect rule present in the Yoruba administration was the payment of taxes. The Yoruba people were already used to paying taxes, unlike in the East, where the people were not comfortable with it.

The major failure of the indirect rule in the west was that the Obas were devoid of western education and did not understand the English language. This, the British used to their advantage in signing treaties in a language they didn’t understand. However, some educated Yorubas, like Herbert Olayinka Macaulay, opposed the indirect rule and fought for nationalism.

So, why did the British introduce indirect rule in Nigeria?

Reasons for Indirect Rule in Nigeria

Due to a lack of adequate personnel, the British administration could not rule directly in Nigeria due to the vastness of the lands and the population of the people. If peradventure, an insurrection should occur, the British may not have the manpower to suppress it.

The colonialists also did not understand the local languages spoken in Nigeria, as they varied from place to place. And there was a need to communicate to the people if their rule was going to be a success. Hence, the indirect rule, needed only a few interpreters to communicate with the rulers.

Now, let’s take a look at some of the advantages and disadvantages of indirect rule in Nigeria.

1.    The traditional mode of operation was modernized and new policies were adopted to administer the governance of the localities.

2.    A lot of the traditional practices which were inhumane and wrong were criminalised and stopped.

3.    Indirect rule was way cheaper than direct rule, as finances were not enough to employ officials that would aid in the ruling, full time. Plus, there would be a provision for accommodation, feeding, and other essentials.

4.    The British invaders did not replace the culture of the people with their cultures, but, instead, used this to their benefit, enabling and developing the trust of the people.

5.    The traditional chiefs were recognised and given prominence and respect. This they did to acquire the trust of the people. However, traditional rulers that refused to work for the British, like Jaja of Opobo and Nana Olomu, were either removed or killed. It is pertinent to note that these rulers were only stooges and employees of the British administration. They had no mind of their own.

1.    The chiefs became autocratic, greedy, and ruthless, as the system placed more powers than the traditional system had deposited in them.

2.    The British needed the ignorance and timidity of the rulers and used this to their advantage. Hence, the elites and the educated members of the society were side-lined for fear that they would question certain policies.

3.    The chiefs were caught between serving the people as their representatives and obeying the British administration. They mostly preferred the latter to the former and it led to clashes between these chiefs and their people, especially in the east.

Finally, the chiefs and emirs due to the benefit and autocratic model of governance they enjoyed, contributed mainly to the delay in the constitutional development, advocated for by the early nationalists.

In summary, indirect rule was a kind of rule where existing tribal structures and traditions are used as channels for establishing rules and regulations while the British officials worked behind the scenes and could exercise veto power.

In some cases, the British designated a person to act as “chief” in settings where there was no clear hierarchical structure in place.

This article was sent in by Edeh Samuel Chukwuemeka, a web developer and a law student at the University of Nigeria, Nsukka. Edeh is also the founder of Bscholarly, an online resource centre created to help students all over the world in their academic pursuits.

If we’ve opened your eyes to something new, make sure you are subscribed to our YouTube Channel and have pressed the bell button for interesting historical videos. You can also follow us on all our social media handles and don’t hesitate to as well share this article with your friends.