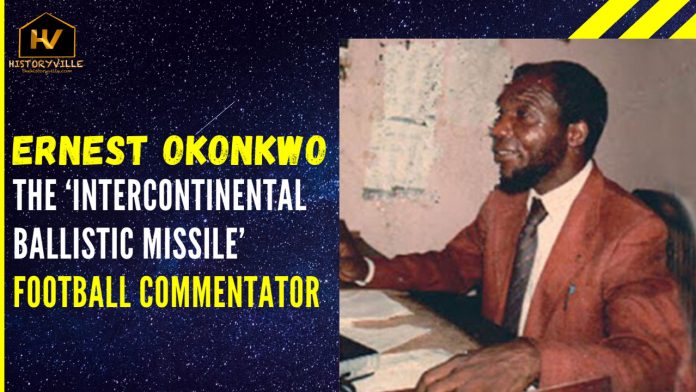 Although Ernest Okonkwo held sway as a sports commentator with the Federal Radio Corporation of Nigeria, he was more famous as a football commentator. Okonkwo was one of Africa’s best football commentators, if not the best. He added fun, zeal, desire, and professionalism to his job. Check out this commentary:

“Odegbami dilly-dallies, shilly-shallies, and locates Elastic Humphrey Edobor. The storm is gathering near the opponent’s goal area, and it would soon rain a goal. Edobor turns quickly to the right and returns the ball to Odegbami. Odegbami kicks the ball towards Quicksilver Sylvanus Okpala who shoots an Intercontinental Ballistic Missile from outside the penalty box. It is a goal! It is a goal! Nigeria has scored!”

Well, there are many more below. Just read on.

Today, August 7, 2019, makes it 29 years since the golden voice of sports commentary, especially football, on the radio in Nigeria, Ernest Okonkwo breathed his last. The voice can only be heard by those privileged to have made recordings while the legendary Okonkwo was alive.

The commentary above is a brief reconstruction of the late Ernest Okonkwo’s characteristic descriptions of events in a football match between the then Green Eagles of Nigeria and a foreign national team. Okonkwo was one of the best radio commentators of his age.

To the latter generation of sports followers in Nigeria, Okonkwo’s name may not ring a bell. But to the older ones, the broadcast journalist represented the best in the running of sports commentaries on the radio.

He was a master of descriptive language. Like Chief Segun Odegbami once remarked about the late sports commentator, Okonkwo was “always conjuring words easily, effortlessly and aptly like a magician with his bag of tricks”.

“That was how powerful radio commentaries were rendered by great commentators, each with their unique style and strength in delivery.

“Despite the brilliance of Ishola Folorunsho, Sebastine Effurum, Kevin Ejiofor, Tolu Fatoyinbo, Yinka Craig, Dele, and a few others, Ernest Okonkwo stood slightly apart and ahead, shining just that little bit brighter in that constellation of stars that turned ‘commentating’ into an art form and made listening irresistible.

“As he ran the commentaries, he would conjure descriptive words delivered in impeccable English and a masterful usage of football lingo. The magic is that wherever he described a particular player and gave him a nickname, it stuck, thereafter, forever.”

A Giver of Names

In the 1970s through 1980s, despite the preponderance of world-class musicians across the globe, Ernest Okonkwo’s radio commentaries are considered more melodious to listen to than the best of music.

An influential sports commentator, Ernest Okonkwo was a word­smith. His captivating football commen­taries were made of simple, but fluent English.

He was an expert at coining words and new expressions. Football commentary listeners on Radio Nigeria will remember his nicknaming of footballers like Segun Odegbami as ‘Mathematical’, Adokiye Amiesimaka as ‘Chief Justice’, Yisa Sofoluwe as ‘Dean of Defence’, Sylvanus Okpala as ‘Quick Silver’ or other expres­sions like “Christian Chukwu taking an ‘Intercontinental Ballistic Missile’ type of ‘banana shot’.

That was how he nicknamed Dominic Nwobodo of Enugu Rangers, ‘Alhaji’, after the player sustained a head injury during a match, wrapped his head with a bandage that made him look like a Muslim wearing a turban when he returned to the pitch.

Emmanuel Okala was ‘Tallest’ for his towing 6ft 5in imposing frame. Christian Chukwu was ‘Chairman’ for his commanding and leadership style on the field of play. Alloysius Atuegbu, stocky, short but powerfully built, was ‘Blockbuster’.

Interestingly, Amiesimaka served as Attorney-General and Commissioner of Justice in Rivers State after his retirement from football. Was that prophetic?

There were ‘Slow Poison’ (Idowu Otubusen), ‘Elastic’ (Elahor), ‘Caterpillar’ (Kelechi Emetole), and so on. All became household nicknames in Nigerian football.

On November 12, 1977, in a 1978 World Cup qualifying match against Tunisia at the National Stadium, Surulere, Lagos, Nigeria needed just a draw to feature in Argentina the next year.

Alas! In the 61st minute, with the score at 0-0, defender Godwin Odiye headed the ball past goalkeeper Emmanuel Okala into his own net. With a pin-drop silence in the background, you could hear the commentator, Ernest Okonkwo screaming, “Nigeria has scored Nigeria”.

It was the best one could get out of the situation that at least Nigeria scored. To Okonkwo, it was the only way of consoling the brooding spectators.

The ‘Golden Voice’ of Sports Commentary

In another rhythmic description of a match between Rangers of Enugu and Raccah Rovers of Kano in 1979, he says:

Recalling his commentary in a World Cup qualifying match between Nigeria and Tunisia in 1985, he says again:

Also, around 1987, when Iwuanyanwu Nationale of Owerri (former Spartans) played against the African Sports of Côte d’Ivoire right at the Owerri Township stadium, Nigeria’s Rashidi Yekini was playing for the Ivorian club.

Yekini was a torn in the flesh of Iwuanyanwu Nationale’s defense. No one could mark him! He was taller, bigger, and faster than the defenders guarding him. He knew the terrain and the Iwuanyanwu players quite well. He almost single-handedly destroyed the Owerri ‘war-lords’ that anytime he got a through-pass it was always deadly. So whenever that happened, Ernest Okonkwo would say, “the devil is out of the chain, the devil is unchained”.

Such was the power of his description and coinage of expressions that former national team left-winger, Adokiye Amiesimaka was quot­ed in a publication as calling for the naming of the media tribune of the Abuja National Stadium after Ernest Okonkwo.

Born in Nando in Anambra-East Local Government Area, present-day Anambra State in 1936, Ernest Okonkwo attended the local primary school there before he proceeded to the famous Government College Umuahia, present-day Imo State for his secondary studies.

Okonkwo joined what is today the Federal Radio Corporation of Nigeria (FRCN), then known as the Nigerian Broadcasting Corporation as a Programme Assistant on March 8, 1957, before being trained at the Australian Broadcasting Commission between 1964 and 1965. He later became the first manager of sports and head of Outside Broadcast (OB) with sheer dint of hard work.

Okonkwo’s death on August 7, 1990, marked the end of a journey he began 33 years ago in 1957 when he joined the then Nigerian Broadcasting Corporation (NBC).

He was survived by his wife, Mrs. Joy Okonkwo, and five children, one of whom is Amaka Okonkwo-Oboh who is a sports lawyer.

Unfortunately, little is known about his personal life but we will not relent to research more on the life of the man who made football commentary soothing to the ears in his heydays.

Which other commentary lines about Ernest Okonkwo do you know about? You can share them in the comment box below.