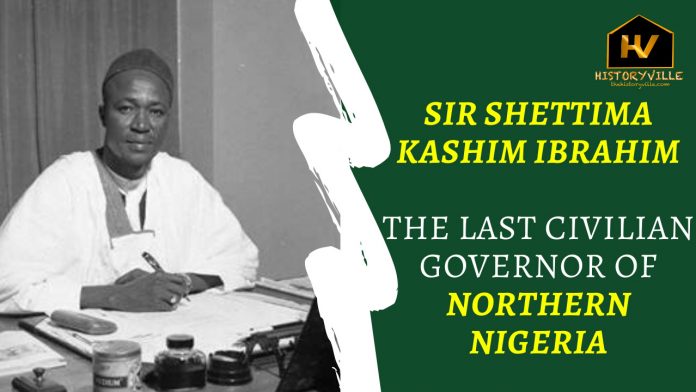 Undoubtedly, one of the most turbulent times for Sir Kashim Ibrahim was when he had to act as a mediator during the power tussle between the Sardauna of Sokoto and Emir of Kano in 1963 which saw the latter banished to Azare, present-day, Bauchi State. As the last civilian Governor of Northern Nigeria, he instituted many reforms and saw to the growth of Northern Nigeria until his tenure was terminated in the January coup of 1966.

Sir Kashim Ibrahim was born at Yerwa, the old quarter of Maiduguri, capital of Borno state, to Ibrahim Lakanmi on June 10, 1910. Born into the aristocracy of the famous Kingdom of Borno, Kashim Ibrahim, a Kanuri man, attended Koranic school, necessary for the traditional office of Shettima for which he was groomed by his father. He was to take this office (overseer of traditional judicial officers) in 1935 and became known as Shettima Kashim Ibrahim from then on.

Kashim Ibrahim proceeded to Borno Provincial School and then, from 1925 to 1929, to the famous Katsina Teacher Training college, now Barewa College, Zaria, where almost all the prominent Western-educated men of the first generation in northern Nigeria went. He qualified as a teacher there and then taught at the Borno Provincial School.

He became a visiting Teacher from 1938 to 1947 and an Education Officer from 1947 to 1949. His educational works included considerable expansion of schools in Borno, the creation of the Maiduguri Teachers’ College in 1952, and the writing of primary school textbooks in Kanuri and the English languages. Sir Kashim Ibrahim believed so greatly in Western education, which he made sure all his children received.

Shettima Kashim, as he was always known then, naturally became one of the more prominent Northern Region politicians. Among the founders of the Northern People’s Congress, NPC, he was elected to the Northern Region House of Assembly in 1951 and from there to the Federal House of Representatives, where he served from 1952 to 1955. Later, he was in the Federal Senate.

In 1956, however, he returned to Maiduguri to assume the traditional office of Waziri of the Emirate of Borno after two previous Waziris had been forced to resign as a result of scandals in the Borno local administration. He carried out very necessary reforms in the traditional local government.

In 1962, he was appointed the first Nigerian Governor of the Northern Region succeeding Sir Gawain Westray Bell (1909-1995) and was Knighted by the Queen of England in the same year. Unfortunately, that rule ended with Nigeria’s first military coup d’état of January 15, 1966. Kashim Ibrahim was arrested but later released unharmed by the coup plotters. He remained indoors in Maiduguri thereafter without attending any public functions.

He was denied his pension as a former Governor, acquired little material wealth and had only one house in Maiduguri, of which the larger part he donated for schooling.

Many places, institutions and monuments were named after him, one of which is the Kashim Ibrahim College of Education, Maiduguri, Borno State.

Ahebi Ugbabe: The Only Female King of Colonial Nigeria