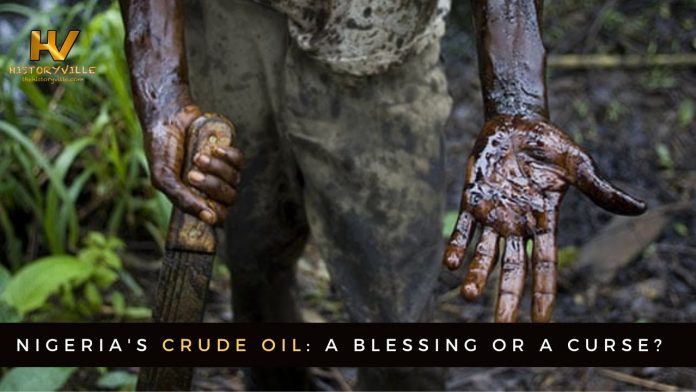 The people of the Niger Delta who relied predominantly on Agriculture as a means of livelihood before the discovery of black gold (crude oil) in their soil, are predominantly based in what is now the south-south geopolitical zone of Nigeria.

In 1956, crude oil was found in a surprisingly large quantity within the Niger Delta region and since then it has been a source of concern whether to regard it as a blessing or a curse. This is because, on the one hand, the discovery led to the oil boom in Nigeria thus enhancing economic growth, employment opportunities, infrastructural development, and ultimately, the country’s greatest source of revenue for many years now.

On the other hand, however, the discovery left the Niger Delta with adverse effects, to mention but a few: general environmental degradation, soil impoverishment, pollution, loss of human and aquatic life, biodiversity, et cetera.

How was Crude Oil Discovered in Nigeria?

As earlier stated, agriculture was the major source of Nigeria’s foreign exchange earnings through the exportation of cash crops such as rubber from the south-south region, especially in what is today known as Delta State. Groundnut, hide and skin from the north, cocoa and coffee from the west, and palm oil/kernels from the eastern region of the country. Things however took a 360-degree turn after the end of the Nigerian Civil War in 1970; all focus and attention moved from agriculture to the commercialisation of crude oil.

Shell D’arcy Petroleum Development Company of Nigeria, a consortium of Shell and British Petroleum was given a licence to explore oil all over the territory of Nigeria. However, the original 920,000 square kilometres acreage allotted to the company in the original license was subsequently reduced on about two occasions.

In 1937, the company began to carry out its exploration duties. Shell-BP in the pursuit of commercially available petroleum began production in 1958 and was soon joined in the Niger Delta by a host of other foreign oil companies (Mobil Oil, Chevron, Agip Oil, Elf, Gulf Oil, Texaco) in the 1960s after Nigeria gained its independence.

The Negative Impacts of Oil Discovery in the Niger Delta

Since the discovery of oil in Nigeria, serious concerns have been raised over the impacts of oil pollution, particularly in the Niger Delta region. The foreign companies in their bid to search for and extract oil from the soil (where found) were grossly negligent about the havoc they were causing to the lands. Oil spills became the order of the day making the once ever-green lands of the Niger Delta look like deserts.

The people in the Niger Delta majorly farmed and fished as a source of livelihood until the foreign companies came and destroyed their farming lands as well as contaminated their waters in their quest for oil. This is perhaps the most significant loss in the memories of the people.

Oil pollution has caused grave dangers and damage to the environment, which consequently affects the lives of local communities and ethnic groups such as the Ogoni and Ijaw or Izon.

Amnesty International, a Non-Governmental Organisation focused on human rights, reported in 2009 that “pollution and environmental damage caused by the oil industry in the Niger Delta have resulted in violations of the rights to health and a healthy environment, the right to an adequate standard of living (including the right to food and water) and the right to gain a living through work for hundreds of thousands of people.”

The country’s own National Oil Spill Detection and Response Agency (NOSDRA) recorded three thousand, two hundred and three (3,203) oil spills in the Niger Delta region between 2006 and 2010. This was reported in an editorial of the Daily Independent (Nigeria) in August 2010.

Asides from the obvious impacts of oil pollution, there has also been quite a number of human rights abuses carried out against those protesting against oil pollution. In 1999, Human Rights Watch reported that “the Nigerian security forces have beaten, detained, or even killed people who were involved in protests over oil companies’ activities and individuals who have called for compensation for environmental damage” and that “multinational oil companies are complicit in abuses”.

One of such notable victims of this brutality was Ken Saro-Wiwa.

Kenule Beeson, popularly known as Ken Saro-Wiwa, was a  well-known Nigerian author and television producer but the position most associated with him was his role as president of the Movement for the Survival of Ogoni People (MOSOP); an organisation set up to defend the environmental and human rights of the Ogoni people who live in the Niger Delta.

But what do the Ogoni denizens get in return? Nothing but a ravaged environment devoid of life and hope. The farmers and fishermen who predominantly occupied this land received little except farmlands and rivers that were once fertile turned into contaminated fields from oil spills and acid rain.

In January of 1993, Ken Saro-Wiwa gathered about 300,000 Ogoni to protest peacefully to demand a share in oil revenues and some form of political autonomy. MOSOP also asked the oil companies to begin environmental restoration as well as pay compensation for past damage.

In May 1994, Saro-Wiwa, who had been briefly imprisoned many times before, was arrested in his home and jailed along with other MOSOP leaders in connection with the brutal murder of four Ogoni leaders. There existed a tension between these chiefs and the MOSOP group. But MOSOP denied having any involvement with the killings. Although not formally charged, they were imprisoned, tortured, and denied access to families, friends, legal representation, and medication.

Amnesty International issued a statement that Saro-Wiwa’s arrest was “part of the continuing suppression by the Nigerian authorities of the Ogoni people’s campaign against the oil companies” and declared Saro-Wiwa a “prisoner of conscience – held because of his non-violent political activities.”

Meanwhile, the Nigerian military, “searching ostensibly for those directly responsible for the killings” took control of Ogoniland, reportedly subjecting the people to mass arrest, rape, execution, and the burning/looting of their villages.

A military tribunal in October 1995 tried and convicted Ken Saro-Wiwa of murder. Governments and citizens’ organisations worldwide condemned the trial as fraudulent and urged the General Sani Abacha-led federal military government to spare Saro-Wiwa’s life. They also called upon Shell to intervene but it could not get involved in the legal process in Nigeria. The company issued a statement in response to the confirmation of the death sentences which acknowledged that a letter had been sent to Abacha asking for clemency.

On November 10, 1995, Saro-Wiwa and his eight co-defendants were hanged despite international appeals for leniency. There was international condemnation and outrage against both the military and Shell. The only crime Saro-Wiwa and his colleagues had committed was to demand sound environmental practices and to ask for compensation as well as restoration for the destruction of Ogoni territories.

The Ogoni cause has since been upheld by other Ogoni people living in exile with the Late Ken Saro-Wiwa’s family (his son, Ken Wiwa and his younger brother, Owens, a medical doctor) at the forefront.

Ken Saro-Wiwa’s life has not only been a source of great inspiration for human rights and environmental activists around the world, but also a pacesetter for them to follow and emulate.

After the death of General Sani Abacha in 1998, Ogoni land was still predominantly militarised and not much had changed in terms of remedying the damage done to the region. There was a long-standing call for an independent body to carry out an assessment of the extent of damage done as that was the first step to any form of real restoration.

The Nigerian government finally succumbed in 2006 and invited the United Nations Environment Programme (UNEP) to carry out an environmental assessment study of Ogoni land in the Niger Delta. The Shell Petroleum Development Company Joint Venture of Nigeria funded the report and provided data.

After two years of study, the UNEP project team submitted its report which contained science-backed evidence of massive environmental pollution and degradation with serious consequences for biodiversity conservation.

Over nine years after the submission of the UNEP report, the various expected actions necessary to facilitate the commencement of the clean-up and remediation programme are still at the preparatory stages. Thus, raising doubts about the commitment of stakeholders to the project, their serial assurances notwithstanding.

In a recent statement of the Unrepresented Nations & Peoples Organisation (UNPO) “the prolonged delay in the clean-up of the oil-polluted region of Niger Delta, in Ogoniland, is likely to trigger COVID-19 deaths, as indicated by environmental experts. The clean-up exercise has not seen much progress since the process was initiated five years ago.”

Today, the delay has added a new layer of hardship to the Ogoni people. Since the local community resorted to poisoned waters for regular hygiene, hand washing with contaminated water may halt the ongoing fight against the present COVID-19 (coronavirus) pandemic.

So, has Nigeria’s Oil been a blessing or a curse to the Niger Delta? You can share your comments below.