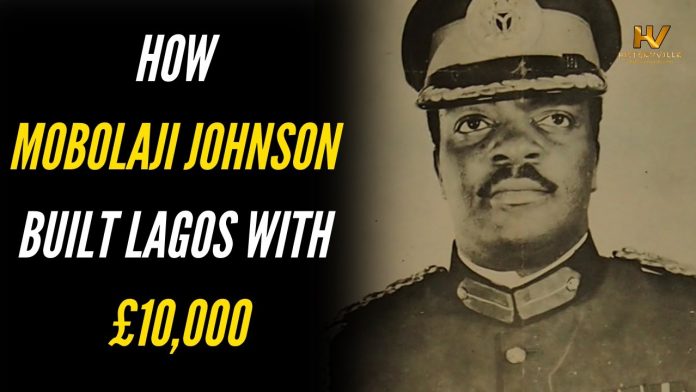 As a Major in the Nigerian Army, Mobolaji Johnson was only 31 years old when Nigeria’s Head of State, Lieutenant-Colonel Yakubu Gowon (b. 1934) appointed him as the first military governor of Lagos State in May 1967. According to Johnson, the appointment was sudden and he had to take it up as a challenge. He credited his achievements to his father, ‘Motola Johnson, who instilled the right character and discipline in him.

When Major-General Johnson Thomas Umunnakwe Aguiyi-Ironsi (1924-1966) became Nigeria’s first military Head of State on January 16, 1966, he wanted someone who was familiar with the federal territory of Lagos. A member of the Nigerian Army who was indigenous to Lagos and could solve its problems. An astute officer.

Therefore, it was not a surprise when the 30-year-old Mobolaji Johnson was named as an administrator of Lagos. As an administrator of Lagos, Johnson’s first budget was a modest £10,000. Due to inflation, that would amount to £150,927.28 in today’s money and equivalent to ₦70,447,239.81 in Nigeria’s current currency. That money cannot even buy an official car of some Nigerian States’ governors.

However, with the help of his cabinet, they were able to generate some internal revenue for the State through pool betting which ensured salaries were paid promptly to civil servants at the end of the month.

Roles in the Nigerian Army

Before his appointment, Major Mobolaji Johnson was second-in-command to the military governor of the Mid-West Region, Lieutenant-Colonel David Ejoor. Johnson also doubled as the Deputy Adjutant, Quartermaster General of the 2nd Brigade Headquarters at Apapa.

As the DAQG, Johnson was in charge of the material needs, paraphernalia, and accommodation of officers and troops in the Western and Mid-Western Region.

Johnson was also Brigade Commander when the January 15, 1966, military coup d’état ended Nigeria’s First Republic. However, barely six months later, there was another coup. This time, bloodier. The Head of State, Aguiyi-Ironsi, the military governor of the Western Region, Lieutenant-Colonel Francis Adekunle Fajuyi, and nearly 300 officers mostly from the Eastern Region lost their lives in the Northern counter-coup of July 28, 1966.

For three days, the nation had no Head of State until Gowon made his maiden speech on August 1, 1966.

Due to military and political tensions in Nigeria, especially the Eastern Region, Yakubu Gowon further broke the administration of the country into 12 States on May 29, 1967. Thus, Lagos became a State on that day and Gowon subsequently appointed Mobolaji Johnson as the first military governor of Lagos State.

As a result, Lagos was now composed of Johnson’s former administrative region of Ikoyi, Lagos Island, and Victoria Island. Some divisions of the Western Region like Ikeja, Ikorodu, Epe, and Badagry were added to Lagos to form a State.

As expected, the Western Region resisted the creation of Lagos State and argued that they had all their industries at Ikeja and it would be daylight robbery to take it from them by a mere announcement. Nevertheless, Mobolaji Johnson travelled with his officials to Ibadan to meet with General Adeyinka Adebayo, the military governor of the Western Region, and the matter was solved amicably.

Like doubting Thomas, those opposed to Mobolaji Johnson’s Lagos never gave him or his officials any chance to develop the State but they went ahead to develop Lagos to the best of their abilities, laying the groundwork of what is today’s Lagos.

At the twilight of his regime, Mobolaji Johnson was already a Brigadier-General and he retired with that rank. On July 29, 1975, another coup would take place which ended Johnson’s administration of Lagos State. In the aftermath, the former governor was investigated on various allegations of corruption but was found innocent.

Brigadier-General Mobolaji Johnson died on Wednesday, October 30, 2019, in Lagos. He was 83.