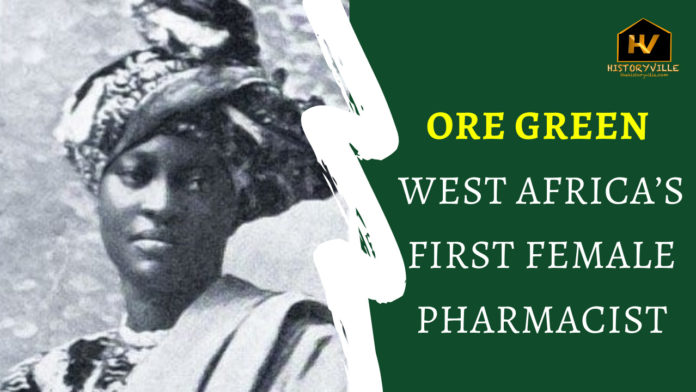 Miss Ore Green, born Oreoluwa Green, was the first female Pharmacist in West Africa. Miss Ore Green was born in Lagos in 1885 as the younger daughter of Mr. Francis Colley Green, a former Superintendent of the Lagos Detective Force, and was educated at the CMS Girls Seminary, St Mary’s Convent School in Lagos, and private tuition under Reverend W.B Euba, where she excelled in Mathematics, Greek, Latin, and Geometry.

Miss Ore Green was fluent in English, French, and Latin, and was also a gifted actress, who famously played the part of Portia in a production of William Shakespeare’s “The Merchant of Venice” in Lagos in June and July 1911.

She then travelled to London in 1912, for further education and obtained a First Class Certificate in the Theory of Music from the London College of Music, Certificate of Central Midwives Board, Honours Certificate from the Clapham School of Midwifery, and Clapham Maternity Hospital.

Miss Ore Green was also the first West African woman to obtain a practical pharmaceutical qualification when she acquired the Apothecaries Certificate of the Pharmaceutical Society of London and in 1916, she acquired her Certificate of Westminster College of Chemistry, Pharmacy, and Botany when she successfully passed her qualifying examinations as a Licensed Druggist.

Ore Green worked as a Dispenser at the Soho Eye and Ear Hospital in London, before returning in 1917 to Lagos, British-Nigeria, where she first worked as a Midwife at the hospital of Dr. Richard Akinwande Savage (1874-1935).

Dr. Savage was the father of Major Richard Gabriel Akinwande Savage Jr. (1903-1993), a medical doctor, soldier, and the first person of West African heritage to receive a British Army commission, and Dr. Agnes Yewande Savage (1906-1964), West Africa’s first female doctor to train and qualify in orthodox medicine and to also receive a university degree in Medicine.

Yewande Savage, like Miss Ore Green (although far junior to the latter) also graduated with First Class honours from the University of Edinburgh, Scotland, United Kingdom, in 1929. She was only 23 years of age.

Not much is known about Miss Ore Green’s later life, although as of the 1920s, she was still living. But from what I gathered, she never married nor have children of her own (not confirmed). More researches about her and other Lagosians of the Edwardian era are still ongoing.

However, in a bid to contribute more to Lagos and its people, Miss Ore Green later set up her own establishment and practiced as a Nurse and Pharmacist at 71, Campbell Street, Lagos.

Nurse Green, as she was fondly called, was a highly accomplished, well-read, and cultured lady who did not hesitate to express the outstanding talents she was endowed with. Much of which we still remember today.