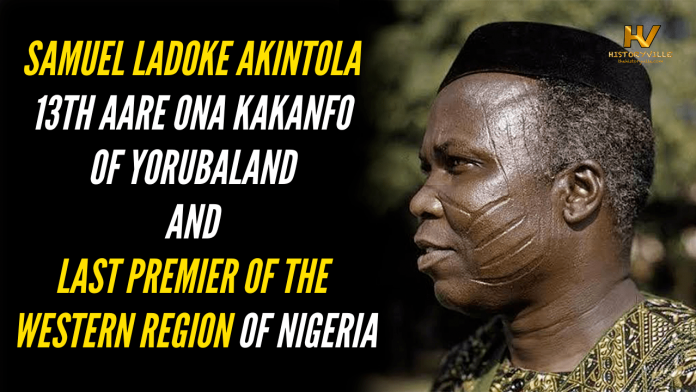 Samuel Ladoke Akintola or “S.L.A.” (July 6, 1910 – January 15, 1966) was a Nigerian politician, lawyer, aristocrat, and orator who was born in Ogbomosho, present-day, Oyo State, Nigeria. In addition to serving as one of the founding fathers of modern Nigeria, he was also the 13th Aare Ona Kakanfo of the Yoruba people.

After the previous Kakanfo, Aare Latosa who was in charge for 16 years from 1871 – 1885, no one had the courage to accept the title for 79 years because of the alleged mysterious curse associated with it.

Since Alaafin Ajagbo inaugurated the first Aare Kokoro Gangan of Iwoye in 1650, no Aare was expected to live long and enjoy a soft death.

Samuel Ladoke Akintola was killed brutally by Captain Emmanuel Nwobosi during the coup and the curse continued when his successor Moshood Kashimawo Olawale “MKO” Abiola also died under mysterious circumstances in July 1998.

Samuel Ladoke Akintola was born on July 6, 1910, into a family whose virtues were wealth, courage, and bravery. A family where an individual must naturally comply with the norm. His father was Akintola Akinbola, and his mother was Akanke.

The Akintola family, famous for military history and considerable wealth, emigrated to Minna, present-day Niger State, with Ladoke in 1914, where he had his early education at C.M.S. Minna. Shortly after that, his father was caught in the 1918 Adubi War in Abeokuta on his journey to Lagos to buy textiles. The senior Akintola did not return until later that year.

Ladoke was then sent back to Ogbomosho in 1922 to live with his paternal grandfather where he continued his education at the Baptist Day School from 1922 to 1925. In Minna, he developed his skills and knowledge in English, Yoruba, Nupe, and Hausa.

After his elementary education, he moved to the Baptist College Ogbomosho – a teaching and seminary school in 1925, and after completing his secondary education in 1930, as he was a brilliant student, Samuel Ladoke Akintola was sent to the Baptist Academy in Lagos as a tutor of General Science, Biology, and Bible Knowledge.

Samuel Ladoke Akintola was a teacher and House Master at the Baptist Academy for a continuous period of 12 years, from 1930 to 1942.

After the drudgery and stagnating life of a school teacher and a lack of job opportunities, he resigned from the Baptist Academy in 1942 to join the Nigerian Railway Company, where he worked briefly, before moving to the journalism profession, by entering Ernest Ikoli’s Nigerian Daily Service Newspaper in 1942, from where he rose steadily to become its editor.

At school, he started dating Faderera Awomolo, a sister of his friend at Baptist College, who had also been trained as a nurse at the Baptist Hospital back home in Ogbomosho. Faderera’s father, a very strong-willed police officer from Igbajo – an Ijesha speaking group, in today’s Osun State, also had very strong views.

Faderera inherited the stubbornness of her father and married Samuel Ladoke Akintola in 1935 when she was sent home to Lagos. Together, they had five children – Modele, Yomi, Abimbola, Ladipo, and Olatokunbo.

After training as a lawyer in the United Kingdom, Akintola returned to Nigeria in 1949 and joined forces with other trained Nigerians from the Western Region to form the Action Group (AG) under the leadership of Chief Obafemi Awolowo.

As Deputy Leader of the AG, he did not serve in the Regional Government of the Western Region, led by Awolowo as the Premier, but was the Parliamentary Leader/Leader of the Opposition Action Group in the House of Representatives of Nigeria. At the federal level, Samuel Ladoke Akintola served as Minister of Health and later as Minister of Communications and Aviation.

Decisions on the course of the party’s political alliances, the acceptance of democratic socialism as a party platform, and the fight for party hegemony led to a dispute between Chief Akintola and Chief Awolowo. Akintola disagreed with Awolowo’s decision not to join the coalition government.

Akintola felt that the Yoruba people of the West had lost their dominant role in industry, university, and administration in Nigeria to the Igbo people of the East simply because the Igbo-controlled NCNC had joined the government and the AG had not.

He also opposed the decision of the party to adopt democratic socialism as its ideology, favouring a more conservative approach. Samuel Ladoke Akintola was accused by Chief Awolowo of seeking to oust him as leader of the party.

In May 1962, with the Western House of Assembly expected to replace Akintola, the crisis exploded on the floor of the House after the party had previously passed a vote of no confidence on the Premier at a party conference.

The AG party split into two factions leading to several crises in the Western Region House of Assembly that led the Federal Government, headed by Prime Minister Sir Abubakar Tafawa Balewa, to declare a State of Emergency in the Western Region and the appointment of Chief (Dr.) Moses A. Majekodunmi, the Federal Minister of Health, as Administrator.

Watch the video of the crisis here.

Eventually, Samuel Ladoke Akintola was returned to power as Premier on January 1, 1963. In the 1965 general election, Akintola won his place as Premier, not as a member of the Action Group, but as leader of a newly established party named the Nigerian National Democratic Party (NNDP), which was a faction in alliance with the ruling Northern People’s Congress (NPC).

In the early hours of January 15, 1966, the military struck and Samuel Ladoke Akintola was assassinated at the Premier’s Lodge at Ibadan by a team of Nigerian soldiers led by Captain Emmanuel Nwobosi.

He was later buried in his hometown, Ogbomoso, on January 23, 1966, as the entire community wore a sad, sober, and mournful look and a literal end, to the life of an Aare Ona Kakanfo who had fought a war with his tongue, his pen, and strength!

Samuel Ladoke Akintola was a capable orator and was responsible for the establishment of the University of Ife (now Obafemi Awolowo University, Ile-Ife) in 1962 and the creation of the Cocoa House in 1965, while still the premier of the Western Region. He was also active in the construction of the Premier Hotel and other monuments in the Western Region.

The Ladoke Akintola University of Technology (LAUTECH), Ogbomosho, is named in his honour. Other numerous places in the country are also named after him.

How Akintola was killed in Nigeria’s first military coup d’état, has been narrated in this book, A Carnage Before Dawn. You can get a copy on Amazon and other leading bookshops in Nigeria.

How Akintola, Balewa, Bello others were killed in Nigeria’s First Military Coup

Ugbodaga, K. (2019, May 1). What you don’t know about Samuel Ladoke Akintola. Retrieved from https://pmnewsnigeria.com/2019/05/01/what-you-dont-know-about-samuel-ladoke-akintola/