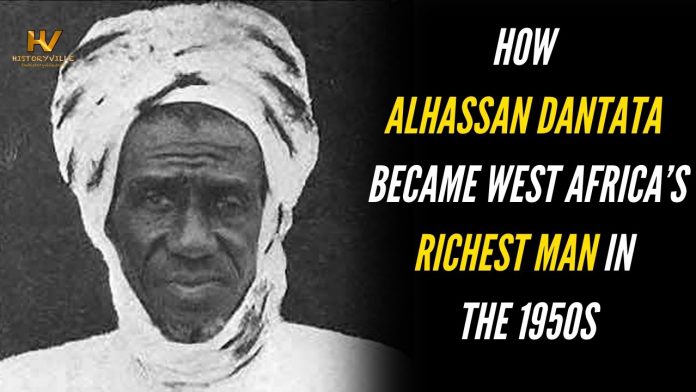 Alhaji Alhassan Dantata was a Nigerian businessman who was the wealthiest man in West Africa at the time of his death on August 17, 1955.

The young Alhassan was brought up in the care of an old slave woman, who was known as “Tata” from which circumstance young Alhassan became known as Alhassan Dantata because of her role as his mother. “Dantata” means “son of Tata”.

So, how did a son of an old slave woman become West Africa’s Richest Man in the 1950s?

Dantata’s father was Abdullahi, a man from the village of Danshayi, near Kano. Alhassan Dantata was born in Bebeji in 1877, one of several children of Abdullahi and his wife, both of whom were traders and caravan leaders.

Bebeji attracted many people of different backgrounds in the 19th century, such as the Yorubas, Nupes, Agalawas, etc. It was controlled by the Sarki (chief) of Bebeji who was responsible for the protection of Kano from attack from the southwest.

Alhassan Dantata was born into an Agalawa trading family. His father Madugu Abdullahi was a wealthy trader and caravan leader while his mother was also a trader of importance in her own right enjoying the title of Maduga-Amarya. Abdullahi, in his turn, was the son of another prosperous merchant, Baba Talatin. It was he who brought the family from Katsina, probably at the beginning of the nineteenth century, following the death of his father, Ali.

Abdullahi already had a reputation of some wealth from his ventures with his father and therefore inherited his father’s position as a recognized and respected Madugu. Like his father, he preferred the Nupe and Gonja routes. He specialized in the exchange of Kano-dyed cloth, cattle, slaves, and so on for the kola of the Akan forest. Surprisingly, he had added cowries brought to the coast by European traders to the items he carried back to Kano.

Dantata was sent to a Qur’anic school (madrasah) in Bebeji and as his share of his father’s wealth (as so often happens), seemed to have vanished, he had to support himself. The life of the almajiri (Qur’anic student) is difficult, as he had to find food and clothing for himself and also for his mallam (teacher) and at the same time read. Some simply beg while others seek paid work. Alhassan worked and even succeeded at the insistence of Tata in saving.

While still a teenager, great upheavals occurred in the Kano Emirate. This included the Kano Civil War (1893-1894) and the British invasion of the Emirate (1902). During the Kano Civil War, Alhassan Dantata and his brothers were captured and sold as slaves, but they were able to buy back their freedom and return to Bebeji shortly afterward.

Dantata remained in Bebeji until matters had settled down and the roads secure. Then he set out for Accra, by way of Ibadan and Lagos and then by sea to Accra and then to Kumasi, Sekondi, and back to Lagos. He was one of the pioneers of this route. In 1906, he began broadening his interests by trading in beads, necklaces, European cloth, etc.

Before Alhassan Dantata settled in Kano permanently, he visited Kano City only occasionally to either purchase or sell his wares. He did not own a house there but was satisfied with the accommodation given to him by his patoma (landlord.). It was during the time of the first British appointed Emir of Kano, Abbas (1903-1919), that Dantata decided to establish a home in Kano.

In 1912, when the Europeans started to show an interest in the export of groundnut, they contacted the already established Kano merchants through the Emir, Abbas, and their chief agent, Adamu Jakada. Some established merchants of Kano like Umaru Sharubutu, Maikano Agogo, and others were approached and accepted the offer.

Later in 1918, Dantata was approached by the Niger Company to help purchase groundnuts for them. He was already familiar with the manner by which people made fortunes by buying cocoa for Europeans in the Gold Coast. He responded and participated in the enterprise with enthusiasm, he had several advantages over other Kano businessmen.

Dantata could speak some English because of his contact with the people on the coast, thus he could negotiate more directly with the European traders for better prices. He also had accumulated a large capital and unlike other established Kano merchants, had only a small family to maintain, as he was still a relatively young man.

Alhassan Dantata had excellent financial management, was frugal and unostentatious. He knew some accounting and with the help of Alhaji Garba Maisikeli, his financial controller for 38 years, every kobo was accounted for every day. Not only that, but Dantata was also hard-working and always around to provide personal supervision of his workers. As soon as he entered the groundnut purchasing business, he came to dominate the field.

When the British Bank of West Africa (now First Bank of Nigeria) was opened in Kano in 1929, Alhassan Dantata became the first Kano businessman to operate a bank account when he deposited twenty (20) camel loads of silver coins.

Dantata became the chief produce buyer especially of groundnuts for the Niger Company (later U.A.C). Because of this, he applied for a license to purchase and export groundnuts in 1940 just like the U.A.C. However, because of the great depression and the war situation, it was not granted.

However, Alhassan Dantata had many business connections both in Nigeria and in other West African countries, particularly the Gold Coast. He dealt, not only in groundnuts but also in other merchandise. He traded in cattle, kola, cloth, beads, precious stones, grains, rope, and other things. His role in the purchase of kola nuts from forest areas of Nigeria for sale in the North was so great, that eventually whole “kola trains” from the Western Region were filled with his nuts alone.

When Alhassan Dantata finally settled in Kano, he employed people, mainly Igbo, Yoruba, and the indigenous Hausa, as wage earners. They worked as clerks, drivers, and labourers. Some of his employees, especially the Hausas, stayed in his house. He was responsible for their marriage expenses. They did not pay rent and in fact, were regarded as members of his extended family. He sometimes provided official houses to some of his workers.

Alhassan Dantata founded, with other merchants (attajirai), the Kano Citizens’ Trading Company for industrial undertakings. In 1949, he contributed property valued at £10,200 (ten thousand, two hundred pounds) for the establishment of the first indigenous textile mill in Northern Nigeria. Near the end of his life, he was appointed a director of the Railway Corporation.

In 1917, he started to acquire urban land in the non-European trading site (Syrian quarters) when he acquired two plots at an annual fee of £20. All his houses were occupied by his own people; relations, sons, servants, workers, and so on.

Because of his Islamic beliefs, Dantata never transacted business with a woman of whatever age. His wife, Umma Zaria was his chief agent among the womenfolk. The women did not have to visit her house. She established agents all over Kano City and visited them in turn. When she visited her agents, it was the duty of the agents to ask what the women in the ward wanted.

Way of Life, Food, and Health

Dantata was a devout Muslim. He was one of the first northerners to visit Mecca via England by mail boat in the early 1920s. He loved reading the Qur’an and Hadith. He had a personal mosque in his house and established a Qur’anic school for his children.

Alhassan Dantata paid zakkat annually according to Islamic injunctions and gave alms to the poor every Friday. He belonged to the Qadiriyya brotherhood.

Although Alhassan Dantata was one of the wealthiest men in the British West African colonies, he lived a simple life. He fed on the same foodstuffs as any other individual, such as tuwon dawa da furar gero. He dressed simply in a white gown, a pair of white trousers (da itori), and underwear (yar ciki), a pair of ordinary local sandals, and a sewn white cap, a white turban, and occasionally a malfa (local hat).

He was said never to own more than three sets of personal clothing at a time. He never stayed inside his house all day and was always out doing something. He moved about among his workers joking with them, encouraging and occasionally giving a helping hand. He ate his meal outside and always with his senior workers.

Dantata met fully established wealthy Kano merchants, like Maikano Agogo, Umaru Sharubutu, Salga, and so on, when he moved to Kano. He lived with them peacefully and always respected them. He avoided clashes with other influential people in Kano. He hated court litigation. He lived peacefully with the local authorities. Whenever he offended the authorities he would go quietly to solve the problems with the official concerned.

Alhassan Dantata enjoyed good health and was never totally indisposed throughout his active life. However, occasionally he developed malaria fever; and whenever he was sick, he would go to the clinic for treatment. Because of his simple eating habits, he was never obese. He remained slim and strong throughout his life. Alhassan Dantata had no physical defects and enjoyed good eyesight.

Dantata never became a politician in the true sense of the term. However, because of his enormous wealth, he was always very close to the government. He was in both the colonial government’s good books and maintained a very close position to the emirs of Kano. He was nominated to represent commoners in the reformed local administration of Kano and in 1950 was made a Councillor in the emir’s council, the first non-royal individual to have a seat at the council.

In August 1955, Alhassan Dantata fell ill and because of the seriousness of the illness, he summoned his chief financial controller, Maisikeli, and his children. He told them that his days were approaching their end and advised them to live together.

He was particularly concerned about the company he had established (Alhassan Dantata & Sons) and besieged them not to allow the company to collapse. He implored them to continue to marry within the family as much as possible and urged them to avoid clashes with other wealthy Kano merchants.

Dantata was buried the same day in his house in the Sarari ward, Kano. At the time of his death in August 1955, he was reportedly the wealthiest man of any race in West Africa.

It was, and is, rare for business organisations to survive the death of their founders in Hausa society. Hausa tradition is full of stories of former successful business families who later lost everything.

However, Dantata left able heirs to continue his business in a grand way. The reason for this was that his heirs were interested in sustaining the family name and the employment of modern methods of book-keeping; the only local merchant to do so at that time.

Alhassan Dantata: Things You Didn’t Know About Him