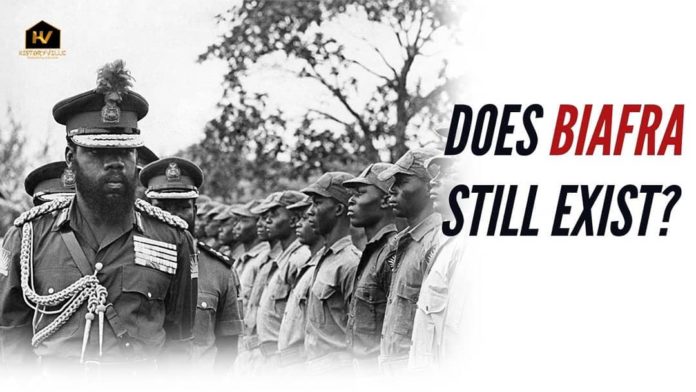 Among the Igbo, Biafra remains a topic that freely elicits intense emotions despite the fact that the Nigerian Civil War ended some 50 years ago. There are those on one end of the scale who are willing to bet their life on the fact that Biafra survives and provides a clear path to their salvation while on the other, others work with the belief that Biafra belongs to history.

Those who believe Biafra is in comatose somehow occupy the center of the scale; keep alive on a life support system that should be sustained until she rises again. Now, the begging question is, does Biafra still exist?

If you don’t want to read on, you can watch the video here.

According to Ùkpúrù, Biafara or Biafra appears to be located on the southern bank (some later accounts say north) of the’ Camarones River, referenced in a map of 1584 by Abraham Ortelius from Antwerp in modern Belgium.

The Ortelius 1584 edition of an atlas is considered to be the first proper atlas, depicting Africa with designated inland cities. The river Camarones, where Cameroon gets its name (from the Portuguese term for prawns), is today known as the River Wouri.

The first European up the river in 1472 was the Portuguese navigator and explorer, Fernão do Pó, whose name was given to Bioko Island in Equatorial Guinea.

What does Biafra mean?

It arose from a town on the river known as ‘Biafra’ or ‘Biafara’ in the area east of the Benin Empire. The coasts of these regions later became known as the Bight of Biafra.

Biafra was identified as the capital of a kingdom of the same name and this town continued to appear on maps at the same river location. Nevertheless, this kingdom does not seem to exist today; if these maps are correct in terms of this town’s location, ‘Biafra’ would be somewhere near today’s Cameroonian town of Yabassi which is also on the Wouri River.

Of note, Biafra would be in the Nkam district of Cameroon’s Littoral Region, which is where Yabassi is today, which is also the Cameroonian department through which the Wouri passes.

The exact location of the settlement, or whether this town existed or not, has not been ascertained, it could be that the town and kingdom were entirely composed of an amalgam of different kingdoms, such as the Bamum Kingdom and other territories. In any case, in the 19th century, the city and ‘kingdom’ of Biafra was excluded from maps.

When was Biafra created?

After the failure of the Aburi Accord, which held in Aburi, Ghana, between January 4 and 5, 1967, Biafra resurfaced again. This time, in the then Eastern Region of Nigeria.

The erstwhile country took its name from the Bight of Biafra.

However, how Biafra got its name as a new nation is attributed to one Chief Frank Opigo, an Ijaw traditional ruler from present-day Bayelsa State, who suggested the name “Biafra”.

Ojukwu, as the governor of the Eastern Region, had gathered stakeholders from other minority tribes in the region. That is, the Ijaw, Ibibio, Efik, et cetera, to come up with a name that would reflect the diversity of the region.

Opigo’s suggestion of Biafra was acceptable with everyone present, in reference to the Bight of Biafra that covers the entire region.

However, not all the minorities were in support of Biafra. A perfect example is Ken Saro-Wiwa, an illustrious Ogoni man and a famous writer, who disapproved of Ojukwu and Biafra.

The Republic of Biafra

The inhabitants of the Biafra Republic were mostly the Igbo people who led the secession because of economic, racial, cultural, and religious tensions among Nigeria’s various peoples. The new country’s development was one of the causes of the Nigerian Civil War, also known as the Nigerian-Biafran War.

The Land of the Rising Sun was chosen as the national anthem of Biafra, and Côte d’Ivoire, Gabon, Haiti, Tanzania, and Zambia formally recognised the country.

France, Israel, Portugal, Rhodesia, South Africa, and the Vatican City are countries that did not officially recognise Biafra but offered support and assistance.

Biafran’s forces agreed to a truce with the Nigerian Federal Military Government after two-and-a-half years of war, during which a million people had died in fighting and starvation, and Biafra was reintegrated into Nigeria.

January 15, 1970, marked the official surrender of Biafran forces to the Nigerian military which effectively terminated the existence of the Republic of Biafra which was proclaimed 30 months earlier in 1967.

Adding credence to this termination would be Effiong’s concession speech at the Dodan Barracks, Lagos.

“And I would like therefore to take this opportunity to say that: I, Major-General Phillip Effiong, Officer of Peace Administering the Government of the Republic of Biafra, now wish to make the following declaration:

“That we affirm we are loyal Nigerian citizens and accept the authority of the Federal Military Government of Nigeria.

“That we accept the existing administrative and political structure of the Federation of Nigeria.

“That any future constitutional arrangement will be worked out by representatives of the people of Nigeria.

“That the Republic of Biafra, hereby, ceases to exist.”– Phillip  Effiong, former Biafran General, handing over in 1970.

In fact, Ojukwu himself while in exile had this to say about Biafra in his interview with the British Broadcasting Corporation (BBC) after the war.

“I am Emeka Odumegwu Ojukwu. I was sometime general of the People’s Army, the leader of Biafra during the Nigerian Civil War in the years 1967 to 1970.

“In all of all the world wars, the most cruel is the civil war. The Biafrans fought with everything they had. They were out-manned, out-gunned, out-everything. But they stood; held up, shoulders back, chest out and they stayed properly, classically British.

“We felt actually the world owed us understanding and that was the one thing the world never gave us. Our people suffered greatly. They were deprived, they were bombarded, and they were totally rendered totally destitute in the period.

“You might also ask me immediately then, ‘why continue the war?’ Because we the Biafrans saw ourselves throughout the entire period under the threat of genocide. And even when we couldn’t fight anymore and moved forward into surrender, we surrendered practically in the belief that this was the end.”

From these two speeches, we may be wont to quickly conclude that the Republic of Biafra went into extinction after the civil war ended in 1970. However, the agitations of some groups in the South Eastern Region of Nigeria would certainly obliterate that thought.

Although some of those who experienced, fought, and survived the civil war, agreed that it was a cruel period that resulted in the deaths of innocent citizens and prayed for such not to happen again. Others who fought the war, say they have no regret to have engaged in it.

A fight for a modern Biafra?

What an average supporter of the Biafran Republic, mostly the Igbo, must know is that the then Eastern region that constituted Biafra are now states with their governors firmly in control of their own affairs. Also, some of the minorities who fought against them during the civil war are still not convinced of a Utopia. The Biafra of 1967 was a single territory governed by one man. Today’s proposed Biafra is ten states governed by ten men.

According to Emeka Ojukwu, the creation of Biafra in 1967 was about injustice and a threat to genocide. But what about the Biafra of today?

In his No Victor, No Vanquished speech on January 15, 1970, General Yakubu Gowon asserted that “the so-called ‘Rising Sun of Biafra’ is set forever.”

“It will be a great disservice for anyone to continue to use the word ‘Biafra’ to refer to any part of the East Central State of Nigeria. The tragic chapter of violence is just ended. We are at the dawn of national reconciliation. Once again, we have an opportunity to build a new nation. My dear compatriots, we must pay homage to the fallen, to the heroes who have made the supreme sacrifice that we may be able to build a nation.” – General Yakubu Gowon’s acceptance speech, January 15, 1970.

Gowon came up with what he described as the 3Rs–Reconciliation, Rehabilitation, and Reconstruction–an effort intended not only to reintegrate Biafrans into Nigeria but also to restore their ravaged homeland.

But to many Easterners, the initiative was designed to fail as they affirm that the Federal Government did nothing to reconstruct their devastated areas.

No doubt, the war had ended. The Igbos and other tribes who fought the war are now Nigerians. But have any lessons been learnt by both sides?

Why Lord Lugard joined Northern and Southern Nigeria in 1914