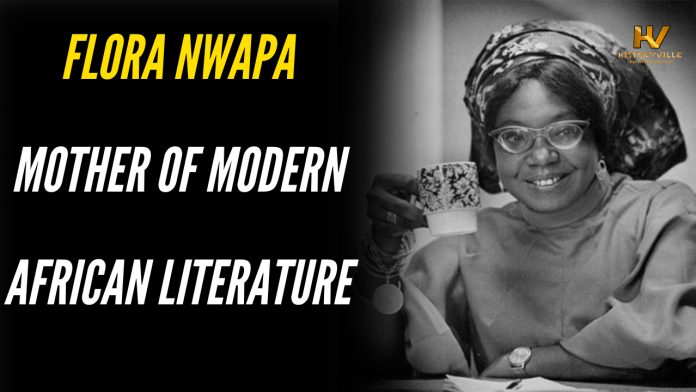 A forerunner to a generation of African women writers, she is remembered as the first African woman author to be written in English in the United Kingdom and internationally recognised, with her first book, Efuru, published in 1966 by Heinemann Educational Books. She is best known for recreating life and customs from an Igbo woman’s point of view.

Who was Flora Nwapa?

Nwapa was born on January 13, 1931, in Oguta, now Imo State, to the wealthy and influential family of Christopher Ijoma Nwapa (a landowner and managing director of the British palm oil exporting company) and Martha Onyenma Onumonu Nwapa (a schoolteacher). Flora was the first daughter of six children.

Nwapa then studied English, History, and Geography at the University College, Ibadan (now the University of Ibadan) from 1953 to 1957. While there, she became president of the Queen’s Hall and met with the Queen of England, Elizabeth II and the Duke of Edinburgh, Prince Phillip during their official visit to Nigeria in 1956.

In 1958, Flora Nwapa attended the University of Edinburgh where she graduated with a Diploma in Education.

She returned from Scotland and became an education officer in Calabar. Nwapa then became a Geography and English tutor at Queen’s School in Enugu in 1959. Between 1962 to 1967, she was Assistant Registrar at the University of Lagos.

When the Nigerian Civil War broke out on July 6, 1967, she fled Lagos with her family and, like many Igbo people, moved to the Eastern Region.

Flora Nwapa is also known for her governmental research on reconstruction after the Nigerian Civil War. From 1970 to 1971, she served as Minister of Health and Social Welfare for the Eastern Central State (now consisting of the states of Imo, Enugu, Anambra, Ebonyi, and Abia). She was the first female Minister of the Region.

In this position, she found a home for some two thousand war orphans. She was also Commissioner for Lands, Census, and Urban Development from 1971 to 1974.

Nwapa made her entrance into the literary career with the novel Efuru, which is based on an old folk tale about a woman chosen by the goddess of the sea to be her worshipper. The book, which she started in 1962, was the first novel to be written in English by a Nigerian woman, questioning conventional portrayals of women.

A central character, Efuru refuses to give up on destiny and tradition because of the obstacles she faces in her two marriages, showing that a woman can live with or without a man in her life.

The novel was published in 1966 by Heinemann Educational Books as part of the African Writers Series after consulting her good friend, Chinua Achebe, who edited the series.

Nwapa’s second novel, Idu, published in 1970, is a story about a woman whose life is tied to that of her husband. When he dies, she decides to hunt him out of the land of the dead instead of living without him.

A war novel, Never Again (1975), which was her third book, is based on the Nigerian Civil War.

The Lake Goddess, her final novel, was published posthumously in 1995.

Published in 1966, Efuru is an eponymous novel about a young woman and is set in a rural community in Eastern Nigeria.

It is the first book to be published by a Nigerian woman.

The heroine of the novel, Efuru, is the daughter of Nwasike Ogene, a revered and celebrated man in the tribe. Efuru falls in love with the poor farmer, Adizua, and elopes with him because he doesn’t have the resources to meet the conventional requirements of marriage.

As the story progresses, we see how Efuru helps her husband financially, rejects the idea of supporting him on the farm, and chooses to be a trader instead. Her effect on her husband is strong enough to make him abandon his farm tools and join her in her trade.

Efuru and Adizua have a girl child, but he soon abandons her, just as his father had done in the past. After Efuru loses her daughter to the cold hands of death, she finds out that her husband has married another woman and had a baby with her.

Her in-laws try to convince her to keep living in their marital home, but she declines and decides to go after him.

She decides to go back to her father’s house after failing to find him. He welcomes her with pleasure because she can take better care of him than anyone else.

Later, Efuru encounters an intelligent young man named Gilbert in her age group. They’re getting married. This time, following the customs of the land. For a while, their marriage has been a happy one as Gilbert and Efuru do business together as partners. However, things start to fall apart when Efuru is unable to conceive any child.

When Efuru was released, the novel received a lot of criticism, most of which was aimed at Nwapa’s “poor prose” and “inauthentic plot.” But, over time, Efuru became an icon of literature, inspiring many African women and giving Flora Nwapa the title of “Mother of Modern African Literature.”

In 1983, the Nigerian government, headed by President Shehu Usman Aliyu Shagari, conferred on Flora Nwapa the OON (Official of the Order of Niger) title, one of the country’s highest honors.

Nwapa was awarded the University of Ife (now Obafemi Awolowo University, Ile-Ife) Merit Award for Authorship and Publishing at the Ife Book Fair in 1985.

In 1989, she was named a Visiting Professor of Creative Writing at the University of Maiduguri, Borno State, a position she held until her demise.

In 1978, she was awarded the highest chieftaincy title of Ogbuefi (killer of a cow) in Oguta, her hometown.

Flora Nwapa died of pneumonia at the University of Nigeria Teaching Hospital, Enugu, on October 16, 1993, and was laid to rest in her hometown of Oguta, a location that influenced much of her writing. She was 62.

At her death, she was survived by her mother, husband, two daughters, and one son.

Apart from writing books, Flora Nwapa, with the aid of her husband, became a publisher when she launched Tana Press in 1974 after becoming unhappy with her publisher.

The company, which published adult fiction, was the first native publishing house owned by a black African woman in West Africa. Between 1979 and 1981, she had written eight volumes of adult fiction.

In 1977, Nwapa also set up another publishing company, Flora Nwapa and Co., specialising in children’s fiction. With these books, she fused aspects of Nigerian culture with the general moral and ethical teachings.

With her own example, she also inspired other women to break the conventional roles of women as wives and mothers and to strive for equality in society through entrepreneurship.

Kenule “Ken” Saro-Wiwa (1941-1995), the late Nigerian-Ogoni environmentalist, writer, and activist, in paying tribute to her at the funeral said:

“Flora is gone and we all have to say adieu. But she left behind an indelible mark. No one will ever write about Nigerian literature in English without mentioning her. She will always be the departure point for female writing in Africa. And African publishing will forever owe her a debt. But above all, her contribution to the development of women in Nigeria, nay in Africa, and throughout the world is what she will be best remembered for.”

Flora Nwapa: Everything To Know About Africa’s First Female Author