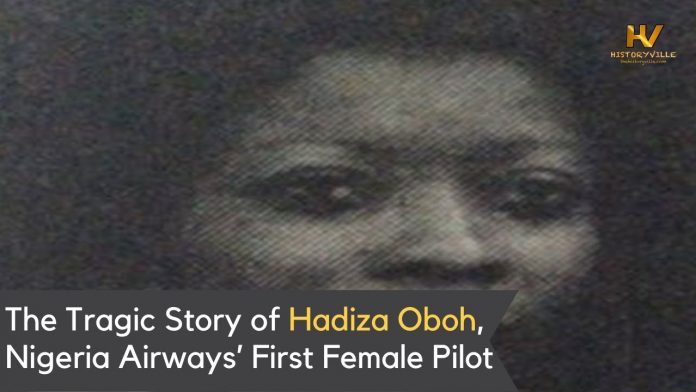 This is the gruesome story of Hadiza Oboh, the first female pilot of Nigeria Airways, who as a Senior First Officer (S/FO), was murdered by her domestic staff on February 8, 1998. The killers were arrested, jumped bail, escaped police custody, and are yet to be found, even to this day. She was only 39.

You can watch the video here.

Who was Hadiza Oboh?

Hadiza Oboh was the first and only female pilot of the defunct Nigeria Airways in the 1990s. She was an amazon in, not only, the Nigerian aviation industry but the world at large. She has also been hailed as a trailblazer by her colleagues in the sector and was seen as a progenitor and the future of the upcoming Nigerian women in the highly skilled sectors, which has been dominated by the menfolk.

Little is known of her early life but as of the time of death, Hadiza Oboh was a single lady in her late thirties who lived alone in her residence in Ikoyi, a highbrow of Lagos, the then capital of Nigeria.

As it was a large house, Hadiza Oboh had her domestic servants who helped her in running the house while she focused on her career. Unfortunately, these servants she trusted with her life would cut down her dreams as a woman who wanted to conquer the skies in her chosen profession.

In 1984, Hadiza Oboh began her career as a Flight Officer aboard a Nigeria Airways Boeing 737 and by 1989, she was already a well-established pilot and remained a superstar of aviation throughout the 1990s. She has always been a point of reference and source of pride for all women associations in Nigeria and Africa.

The Plot to Murder Hadiza Oboh

In addition to running some other activities in the house, one of the domestic servants and chief orchestrator, Abdullahi, served as the gate-man, security guard, and gardener, and had access to all parts of the house.

About 8 pm on that fateful February, Hadiza Oboh drove home from the airport and it was Abdullahi who opened the gate for her as she returned from work. The pilot then went to her bedroom while one of the domestic workers helped her with the flight bag.

Oboh’s help took her flight bag to her bedroom and found many more foreign currencies than normal in the bedroom, along with tons of designer wears, jewel-studded bracelets, gold chains, and many others, and this must have fueled their desire to murder her and cart away her properties.

There must have been a plan in the offing as to the extent of her material wealth which would eventually spur these evildoers into action.

Hadiza Oboh went straight to the kitchen to prepare a meal for herself after resting from her trip, a meal that anyone reading this story would presume was her last, but she never tasted the meal.

Unknown to her, her gateman, Abdullahi had sneaked out and opened the gate to the other three connivers who had entered the house.

Peter Eche, from Benue State, trained as an auto-electrician, was one of the brains behind the plot and in 1993, Oboh had employed him as a gardener and gate-man. He was hired because Abdullahi had been fired by Oboh for gross misconduct. When Peter worked for her, he lived inside the compound in the servants’ quarters.

But when Peter was traveling to his Markurdi village, Oboh decided to re-employ Abdullahi pending Peter’s return. That error would prove extremely deadly.

When Peter returned, Abdullahi moved swiftly and co-opted Peter of his sinister agenda to kill Oboh, mainly because of her wealth, and the latter agreed to be part of the plot.

It has been confirmed that Abdullahi said that Oboh should be killed because “she had much money and properties.” Peter agreed to be part of the plot.

In fact, by coordinating the other assassins who would take part in the operation, he went one step further. The meeting point for the killers was the place outside the house where Abdullahi sold his cheap products.

The Murder of Hadiza Oboh

The strategy was for the killers to skulk around in the dark and wait until Hadiza Oboh arrived at her residence that day. Once they saw she was comfortably inside, they etched their plan which had been painstaking and detailed. Through the rear door of the kitchen, the assassins gained access to the house.

Hadiza Oboh was, inside the kitchen, cooking when they entered. (Why would she cook by herself when she was supposed to have her cooks? Where were they? Are all her domestic servants, men?)

Nevertheless, according to reports, Abdullahi pounced on the unsuspecting victim’s neck with a rope that he had with him and she was overpowered despite her shouts, pleas, and struggles.

As the pilot gave her last kicks in a desperate survival attempt, Abdullahi, the very person she hired to protect her, strengthened her grip and tightened the noose around her throat, cutting off her brain’s blood supply, in reality, strangulating her while other attackers attacked and restrained her.

The bitter fight continued for a couple of minutes and she was left lifeless. The murderers did not stop there. They carried her corpse to the septic tank where they dumped her body (locally and popularly referred to as soak-away). They then got the cement bags and cemented the tank securely.

With the body of Hadiza Oboh secured in the septic tank, they moved to the next stage of their plans by embarking on a proper looting of her residence.

They carted everything that was valuable in her house, from her gold jewels to her expensive wears to the hard currencies, they cleared it all.

Her car was turned into a taxi and even Peter left the boys’ quarters to start living in the main building that the deceased pilot had previously occupied.

In fact, every time a visitor or a friend came to check on her, they would respond in pidgin by saying, “Madam don travel and we no know when she dey come back.”

Disappointed, Hadiza Oboh’s visitors would turn back assuming that the pilot had to travel or was again on her busy schedules.

Nevertheless, nemesis caught up with them as there was a policeman on duty in the house next to Hadiza Oboh’s, who witnessed some unusual movements in and out the residence of the late pilot which would arouse suspicions and investigations when invaders kept telling everyone their rhetoric answer: “Madam no dey house.”

But the officer would not buy the story. Most possibly acting on a tip-off, police officers and security agents immediately swarmed the house.

Peter and others were arrested and bundled to the police station in Ikoyi. Abdullahi had vanished. Interestingly, when they were arrested by the police, no one knew that Hadiza Oboh was dead and buried in a waste pit.

They were arrested on charges of stealing and illegally removing property which formed the basis of their investigation. Peter told the police that the late pilot had traveled and believed him.

There was no way to affirm Peter’s story or contact Hadiza Oboh since in 1998 there were no mobile phones.

The Nigerian police were still appealing to the public as of May 1998, about three months after Hadiza Oboh was murdered, to assist with information to identify the prime suspects connected to her murder.

The pot of soup she was making was still on the cooker when the police arrived at her house, and all dried up. The air conditioners had died and her bloodstains were still visible on the floor of her kitchen.

The rope that was used to strangulate her was discovered between the kitchen and its now vacant sitting room, with all valuable items being stolen.

Her enlarged portrait was the only thing left in her sitting room at that time and it had been coated with dust and cobwebs.

The septic tank was still open with its gaping hole, and there was still the half-used bag of cement. The police gave an explanation about why they didn’t move or touch any of the objects at the scene because they still needed them to investigate and prosecute the suspects.

As this was almost three months after the unfortunate incidence, all the compound grounds were already taken over by weeds right up to the gate, and gone were the days of her well-manicured lawns.

Abdullahi had been named as the prime suspect who masterminded and orchestrated the whole scenario. However, after an intense manhunt, he was arrested and kept in custody.

As the case dragged on, it took a broader aspect, as nobody knew or learned of Oboh’s exact location. Her family and friends asked more questions and pressurized the police as the case had already drawn public attention and Nigerians were eager to know exactly what happened.

Angered by the investigation’s snail speed, Alhaji Abubakar Tsav, who was the Lagos State Commissioner of Police, called for the case file, studied it, and forwarded it to the State Department of Criminal Investigation (SCID), Panti in Yaba.

A frustrated Tsav told journalists at a press briefing that the case had gone beyond theft and that the onus rested on the police to establish the pilot’s whereabouts.

Once that case was taken over by the SCID, the tempo shifted. The crack team of investigators has investigated her home on various occasions. They found on one of their visits that the septic tank had a fresh cement sheet and a half-used cement bag lying in the vicinity. The operatives became very suspicious and then went back to Panti to question Peter further.

The SCID team was back at Oboh’s house the following day and the investigators went on to open the septic tank. They immediately opened a part of the septic tank, and what they saw shocked them beyond disbelief; it was Hadiza Oboh’s body in a state of putrefaction. The corpse was eventually recovered.

At Panti, the SCID team was very sure that they had the assailants in their custody; Peter, Abdullahi, Itoro Akpan (he was Oboh’s driver), and one Denise Osama (he received the late pilot’s stolen goods and property). After much interrogation, Peter confessed to the crime.

The four suspects were arraigned for conspiracy, armed robbery, and murder at the Chief Magistrate’s court in Lagos on June 1, 1998. While the police were seeking advice from the Director of Public Prosecutions (DPP), it was discovered that the High Court had ordered that two of the suspects be released on bail with two guarantors.

Nevertheless, against a public outcry, the Ministry of Justice advised that the perpetrators be re-arraigned for conspiracy, armed robbery, and murder. Unfortunately, efforts to re-arrest the suspects proved to be abortive as their guarantors were alleged to have given the court fictitious names and addresses to process the bail which had aided their escape.

The murderers are yet to be found even as I write this.

Thus, 22 years after her horrible and senseless murder, Hadiza Oboh’s family and loved ones are yet to get justice.

Celebrating ‘First Ladies’ of the professions

How much do we know of domestic staff, drivers?