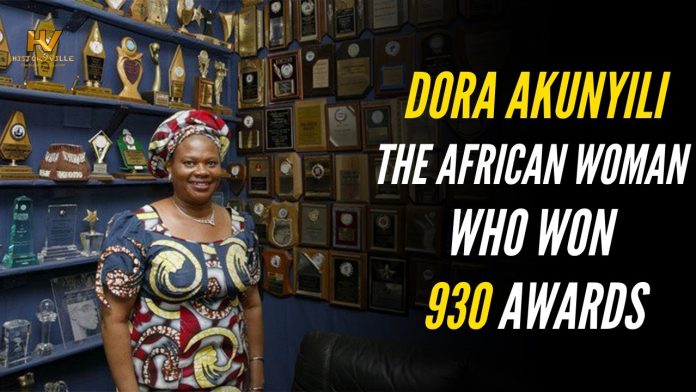 There is no question that Professor Dorothy Nkem Akunyili, popularly known as Dora Akunyili, was an adorable woman, and understandably so because of her unparalleled accomplishments as a pharmacist. This is due to the way in which she brought sanity to the drug manufacturing industry in Nigeria when she served as the Director-General of the National Agency for Drugs and Food Administration and Control (NAFDAC) from 2001 to 2008.

Even in death, Akunyili has earned the respect of many, both at home and abroad, and this could be attested by the number of awards she did receive at national and international levels. It was this great achievement that won her the portfolio as a full cabinet minister in both Presidents Yar’Adu’a and Jonathan administrations.

In this article, we shall take a look at the life and times of Professor Dora Akunyili. Her educational career. The battles she fought as the Director-General of NAFDAC and her role as Information Minister during the dark days of the Umaru Musa Yar’Adua presidency.

Dora Akunyili was born Dorothy Nkem Edemobi in Makurdi, present-day Benue State, on the 14th day of July 1954 to Chief and Mrs. Paul Young Edemobi, but was brought up in Nanka, Anambra State of Nigeria.

Her educational career began when she passed the First School Leaving Certificate with Distinction at St. Patrick’s Primary School, Isuofia, Anambra State in 1966, and the West African School Certificate (WASC) with Grade I Distinction in 1973 from Queen of Rosary Secondary School, Nsukka, both in Nigeria.

Dora Akunyili earned her first B.Pharm (Hons) degree in Pharmacy in 1978 and her Ph.D. in 1985 from the University of Nigeria, Nsukka, UNN. The egghead enjoyed many academic awards and recognitions during her lifetime.

Professor Dora Akunyili kick-started her pharmaceutical career as a Hospital Health Care Provider from 1978 to 1981 at the University of Nigeria Teaching Hospital (UNTH), Enugu. Afterward, she worked as a Graduate Assistant (Research Fellow) at the College of Pharmaceutical Sciences, UNN, from 1982 to 1986.

In the university system, she advanced steadily from Lecturer I in 1986 to Senior Lecturer in 1990.

She was transferred to the College of Medicine, UNN, in 1992, where she was appointed Consultant Pharmacologist in 1996, a position she held until April 12, 2001.

She was also a part-time lecturer at the West African Postgraduate College of Pharmacists, Lagos, Nigeria from 1992–1995, because of her love for teaching and nurturing young people.

As a Scientist and Scholar, she presented more than 20 research papers at various local and international scientific conferences and published a book and 18 journal articles.

Akunyili supervised both Ph.D. and Master’s candidates at Nnamdi Azikiwe University Awka, and the University of Nigeria, U.N.N.

Even as the Director-General of NAFDAC, Dr. Akunyili was able to supervise six postgraduate students at the College of Medicine, U.N.N. She was also an active member of the Pharmaceutical Society of Nigeria (PSN).

Dora Akunyili as the Director-General of NAFDAC

In 2001, President Olusegun Obasanjo decided to name a Director-General for NAFDAC and asked for the advice of an honest Nigerian pharmacist. The name of Akunyili came up easily.

Opposition and protests were raised against Obasanjo that the Minister of Health, Professor ABC Nwosu, was from the same Anambra State as Akunyili and NAFDAC, a powerful agency under the Ministry, should not be headed by another Igbo from Anambra.

It was further claimed that the marketplace for fraud and non-standard products was dominated by Igbo merchants, with Onitsha –also in Anambra State–a major center for illegal industry.

“She’s sure to protect ‘her men,’ her detractors said.

Nevertheless, President Obasanjo, adamant in the cause, dismissed the findings and appointed Akunyili.

She continued to do an outstanding job and was widely recognised as one of the most reliable public officials in Nigeria’s history, praised locally and globally.

Akunyili had lost her sister to a bogus insulin injection in 1988, and that was undoubtedly the motivation she needed to fight these drug barons mercilessly.

Once she resumed office as the Director-General of NAFDAC in April 2001, Akunyili declared the eradication of counterfeit drugs and unsafe food a top priority.

Prior to her appointment to NAFDAC, fake and non-standard food and drugs were sold in Nigeria without any form of regulation.

While Akunyili faced a considerable risk to her personal safety in her battle against the issue of fake drugs, she danced with danger as she survived some assassination attempts.

On March 17, 2009, as the Federal Information Minister, Akunyili coined the phrase “Good People, Great Nation“, which she said would help to promote patriotism among Nigerians.

During the dark days of the Umaru Musa Yar’Adua presidency, Mrs. Turai Yar’Adua, Michael Aondoakaa, then Attorney General of the Federation, and some other members of a purported cabal held the country to ransom, while President Yar’Adua was lying comatose in both Saudi Arabia and Nigeria. Akunyili, against all odds and out of a sense of patriotism, stuck out her neck at the Federal Executive Council meetings to call on them to declare Yar’Adua unfit to rule.

All of them, but Akunyili, felt that they were loyal to the late president, not Nigeria. She was labelled a traitor and an ingrate for daring to ask them to do what was morally and judicially right. She stuck to her guns and ignored all such calls.

In April 2011, Dora Akunyili ran for election as the Senator representing Anambra Central for the All Progressives Grand Alliance, APGA, but was defeated by Chris Ngige of the then Action Congress of Nigeria, ACN.

On July 13, 2013, a strange occurrence happened to Akunyili.

The professor was preparing to travel to the United States to receive an award on the following day, her 59th birthday when she fell ill. She was physically weak with a lot of pain.

However, she was determined to go on the trip to America and it was there that a new diagnosis was made.

Alas, Akunyili had cancer. She became seriously ill, and there were fears that she might lose her life.

Her last public appearance was at the National Conference in Abuja in 2014, where she was a delegate. Pictures of a vulnerable Akunyili immediately flooded the internet. On June 7, 2014, Professor Dorothy “Dora” Akunyili died of uterine cancer in India. She was 59.

Professor Dora Akunyili was a devout Catholic who was survived by her husband, six children, and three grandchildren.

She was eventually buried in her husband’s birthplace in Anambra State.

A pharmacist par excellence, Dora rode where men trembled, especially in the fight against counterfeit and adulterated drugs.

Former President Goodluck Jonathan succinctly described her as a distinguished Nigerian and a loyal citizen who would be sorely missed by those she had been associated with.

Professor Dora Akunyili was a recipient of many awards. In fact, during her lifetime, she received 820 awards. In 2016, two years after her death, her husband discovered 110 more awards packed safely in her boxes, bringing the total to 930. No other Nigerian has won more.

Among them was the Person of the Year 2005 Award by Silverbird Communications Limited; the Award of Excellence by Integrated World Services also in 2005, and, of course, Time Magazine Award in 2006.

We always have more stories to tell, so make sure you are subscribed to our YouTube Channel and have pressed the bell button to receive notifications for interesting historical videos. Don’t hesitate to follow us on all our social media handles and to as well share this article with your friends.