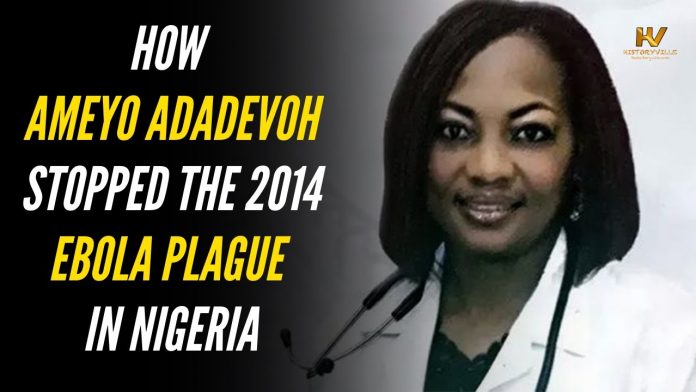 In 2014, Adadevoh was the doctor in charge who oversaw the treatment of Patrick Sawyer, the Liberian national who brought the Ebola virus to Nigeria. When she diagnosed his symptoms, Dr. Adadevoh took an action that would stop the virus, hence saving millions of Nigeria.

As I have written above, Ameyo Adadevoh was a descendant of the famous Bishop Samuel Ajayi Crowther and Herbert Olayinka Macaulay, the father of Nigerian nationalism. If I should trace her lineage further up Crowther, then it would safe to assume that she was also descended from Alaafin Abiodun. The brave King of the Oyo Empire who saw to the end of Bashorun Gaa, that wicked prime minister of the old Oyo Empire.

Born Stella Shade Ameyo Adadevoh in Lagos in 1956, the physician was the daughter of Professor Babatunde Kwaku Adadevoh, an academic expert of chemical pathology and the vice-chancellor of the University of Lagos between 1978 and 1980. Ameyo Adadevoh lived most of her life in Lagos where she spent the last 21 years of her life working at the First Consultant Hospital in Obalende, Lagos Island.

How did the Ebola Virus Disease start?

The Ebola virus disease (EVD) is a life-threatening disease with occasional outbreaks occurring primarily in Africa. The disease most commonly affects humans and non-human primates, like gorillas, monkeys, and chimpanzees. It is caused by infection with a group of viruses in the Ebolavirus genus.

The Ebola virus triggers a sudden, serious illness that is often fatal if untreated. It first appeared in 1976 in two parallel outbreaks, one in what is now Nzara, South Sudan, and the other in Yambuku, Democratic Republic of Congo, with the latter occurring in a village near the River Ebola, where the disease takes its name.

The Ebola outbreak in West Africa from 2014 through 2016 was the largest outbreak since it was first reported in 1976. The epidemic started in Guinea and then spread across borders to Sierra Leone and Liberia.

How did the Ebola Virus Disease get to Nigeria?

On July 20, 2014, Patrick Sawyer left quarantine in Liberia and flew to Lagos, Nigeria to attend a meeting of the Economic Community of West African States (ECOWAS). He collapsed at the Lagos airport and was taken to the First Consultants Medical Center (FCMC), a private hospital where Dr. Adadevoh worked.

Under normal circumstances as an ECOWAS official, he was supposed to be taken to a government hospital, but the doctors at all the government-owned health facilities were on an indefinite industrial action, so he was taken to the FCMC.

The first FCMC doctor to see Mr. Sawyer diagnosed him with malaria. However, when Dr. Ameyo Adadevoh saw him in her ward the next day, she suspected Ebola despite the initial diagnosis of malaria and the fact that neither she nor any other doctor in Nigeria had ever diagnosed the Ebola virus disease before.

Adadevoh asked Mr. Sawyer if he had any contact with Ebola, which he denied. As a diligent clinician she was, she immediately contacted the Lagos State and the Federal Ministry of Health and had him checked for Ebola.

While awaiting the test results, the patient and other Liberian government officials began demanding that Adadevoh discharge Sawyer so that he could attend the ECOWAS meeting, but she declined vehemently.

They threatened to sue her for abduction and breach of his human rights (restraining him against his decision because she did not have a confirmed diagnosis), but she managed to resist their relentless pressure and said that “for the greater public good” Sawyer would not be released.

However, Adadevoh and her team did what they could with the limited resources and supplies they had in the hospital to treat Sawyer. His Ebola diagnosis was later confirmed, and he died at FCMC.

Adadevoh had strongly turned down a request by Sawyer’s employers to have him discharged from the hospital so that he could catch a flight to Calabar, a coastal city that is 750km from Lagos, where he had been due to attend a conference.

Dr. Adadevoh’s precise and timely diagnosis of Sawyer resulted in the Nigerian government mobilizing the resources needed to deal with the outbreak of Ebola in record time.

Its efforts have led to a much more strategic control of the virus across the region, and the Nigerian government has been able to successfully monitor all potential connections from the patient index, Patrick Sawyer.

In all, there were 20 cases of Ebola. Eleven of them were health workers, in which six of them survived while five succumbed to death, including Dr. Ameyo Adadevoh.

For a long time, Ameyo Adadevoh’s noble and patriotic deeds will be remembered. She took it upon herself to help prevent the further spread of the virus in the country by reporting to the government. She put her foot down and stopped Sawyer from leaving the hospital when it was reported he had Ebola.

Her sacrifice averted a national or even a global catastrophe as the story would have been different if Sawyer had ended up in another hospital under the care of another doctor.

In her last hours, Ameyo Adadevoh received intravenous fluids and oxygen assistance and was closely monitored by physicians from the World Health Organisation (WHO). Eventually, she died of the virus on August 19, 2014. She was 57.

Ameyo Adadevoh was a member of the Nigerian Medical Association, NMA, Medical Women Association of Nigeria, MWAN, British-Nigerian Association, and National Postgraduate Medical College. She served as a non-executive Director of Learn Africa PLC and a writer for the first-ever “Ask the Doc” column in Today’s Women Magazine, among other accomplishments.

As of today, Dr. Ameyo Adadevoh is a recipient of 19 awards and honours, albeit posthumously. She was survived by her husband, Afolabi Cardoso, and their only son, Bankole Cardoso.

We always have more stories to tell, so make sure you are subscribed to our YouTube Channel and have pressed the bell button to receive notifications for interesting historical videos. Don’t hesitate to follow us on all our social media handles and to as well share this article with your friends.

You can also get Ayomide Akinbode’s latest historical novels on Amazon, Rovingheights, and Okadabooks.

Why Chinua Achebe never won the Nobel Prize in Literature