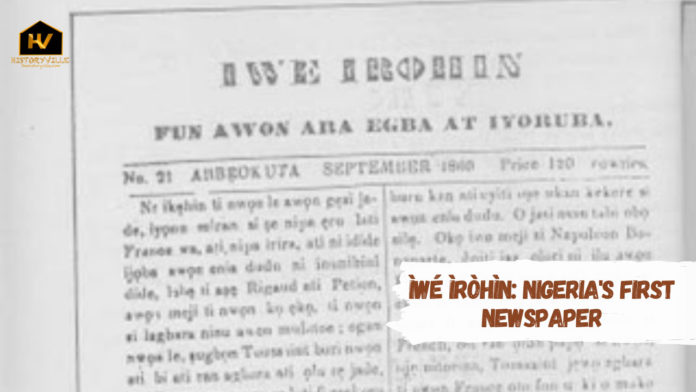 The paper is also considered the first indigenous language newspaper in West Africa and was under the direction of a Church Missionary Society (C.M.S.) Missionary of the Anglican Church, Reverend Henry Townsend (1815-1866). James Ede, an Egbaman, who was trained by Henry Townsend, served as the chief printer of the newspaper.

Townsend’s main intention was to propagate the Anglican faith of Christianity and to also encourage the Egbas and other Yorubas to read and write. Ìwé Ìròhìn was the First Newspaper in Nigeria.

You can watch the video here.

The Founding of Iwe Irohin

The paper first hit the streets of Abeokuta on December 3, 1859, and was published every 14 days. A single edition had about 8 pages in total and was sold for 120 cowries. It published news of church activities, the arrival, and departure of religious dignitaries, ordinations, and so on.

It later broadened its contents by adding stories about Abeokuta, cotton, and cocoa statistics, and from 1860, carried advertisements from local firms and government agencies. The newspaper was highly patronised by the few literates of that time living in Abeokuta and the entire Yoruba land.

Why Iwe Irohin was Established

The circulation of the paper was around 3,000 copies fortnightly (that is, every 14 days) as of that time. The newspaper was cautioned by the C.M.S authorities in 1863 for some of its contents that antagonized the colonial government, but the reprimand did not stop Henry Townsend from running the newspaper.

In January 1866, Iwe Irohin appeared in two versions; one in English and the other in the Yoruba language. The English language version sold for one penny.

Due to the insufficient technical equipment during the period, the paper was printed with the crude technology available and had no pictures, with its pages divided into two columns.

Townsend’s main intention was to propagate the Anglican faith of Christianity and to also encourage the Egbas and other Yorubas to read and write. The paper embraced the anti-slavery movement of the time and also made the proprietor, Henry Townsend, who with Samuel Ajayi Crowther (c.1809-1891) translated the Bible and hymns to the Yoruba language, an influential man in Abeokuta.

However, the newspaper was also involved in some political matters of the time, especially those emanating from the viewpoints of the Egbas and it became a major repository of major views on different political events affecting the residents of Abeokuta during the period.

Reasons for the Collapse of Iwe Irohin

An uprising in Abeokuta in 1867 due to political and cultural differences between the colonialists and the Egba indigenes led to the expulsion of all Europeans from Abeokuta, at that time, and the destruction of the newspaper’s printing equipment which grounded its production as Egba rioters razed the premises, just eight years after its establishment.

The paper first hit the streets of Abeokuta on December 3, 1859, and was published every 14 days. A single edition had about 8 pages in total and was sold for 120 cowries.

This unfortunate event brought an end to Ìwé Ìròhìn, the first newspaper in Nigeria. But before its total decline, it had already fulfilled its mission to develop the reading habit in the Abeokuta people, therefore, leaving them to yearn for news after its demise.

Nevertheless, other newspaper industries sprung up, all in Lagos; the Anglo-African founded by Robert Campbell, succeeded Iwe Irohin in 1863. It was a weekly newspaper that published stories culled majorly from novels, magazines, books, and newspapers from abroad. The major aim in launching the paper was to exploit the growing interest in Western education and enlightenment in Lagos in the 1860s by providing cheap and accessible material which would educate, inform and entertain its readers. But because of lack of money, to run the newspaper, it ceased publication in 1865.

Also in November 1880, Richard Beale Blaize, a Nigerian-Sierra-Leonean businessman, founded and established the Lagos Times and the Gold Advertiser.

The Lagos times was published every two weeks and was in circulation for three years. The newspaper achieved one major feat within its life span. It pioneered militant journalism and nationalism in Southern Nigeria. It was a thorn in the flesh for the colonial administration. Like its predecessors, it ran into financial problems and finally ceased publication in November 1883.

The paper’s early death was not unexpected because of its militancy, it did not enjoy the government’s patronage by way of advertisements and only a few individuals were in a position to insert adverts in the paper. This ultimately led to its demise.

However, in February 1882, before the Lagos Times went into oblivion, Blackall Benjamin, a Sierra Leonean, had established another newspaper called The Lagos Observer. He hired the services of Dr. Nathaniel King, a brilliant medical doctor,  and Robert Campbell. The death of these two gentlemen in 1884 affected the fortunes of the paper but Benjamin carried on single-handedly. The paper did not thrive well and thus, ceased production in 1890.

Nevertheless, in terms of life span, the Lagos Observer was the most successful newspaper in the 19th century. Its role in politics too was distinguished. The newspaper emerged as one of the symbols of the intellectual aggression which characterised political developments in the two decades of the 19th century.

Other newspapers that succeeded Iwe Iroyin were Andrew Thomas’ Iwe Irohin Eko on November 3, 1888. Lagos Weekly Record and Lagos Weekly Times by the Liberian-born businessman, John Payne Jackson in 1890, and The Standard founded by George Alfred Williams on September 16, 1894.

Also, Sir Kitoye Ajasa the first Nigerian to be knighted by the British, published a newspaper, National Pioneer, in 1914 until the paper’s demise in 1936. The paper was considered to be pro-government which made many people hate it.

Ernest Ikoli, the first newspaper editor produced by a Nigerian educational institution, founded the African Messenger on March 10, 1921. The newspaper only lasted five years before it was forced to close due to financial difficulties.

Following the demise of the African Messenger, Adeyemo Alakija, the founder of Daily Times, struck an agreement with Ernest Ikoli, which resulted in the publication of the Daily Times. Ikoli went on to become the Daily Times’ first editor. It was likewise a pro-government publication modeled after the London Times.

The Nigerian Daily Times, on the other hand, gave the Nigerian newspaper sector some energy and a fresh perspective. In addition, in 1948, the colonial authority made it a subsidiary of the London Daily Mirror in order to better serve British interests.

The daily benefited greatly from this arrangement in many ways, including enhanced page planning and coverage of news as fresh ideas streamed in from The London Daily Mirror, which was considered one of Britain’s leading newspapers at the time.

The newspaper grew so strong financially that it was able to poach reporters from competing publications. It also saw an increase in daily circulation, drawing additional adverts. Daily Times was able to expand as a result of these benefits, and it continued to operate until the 1990s.

Other newspapers established in the early 20th century were Herbert Macaulay’s, the Lagos Daily News in 1927 – this was in collaboration with Akinlade Caulcrik. The Nigerian Daily Telegraph by Akin Fagbenro Beyioku, also in 1927. Akede Eko by J.B. Thomas in 1929; The Comet by Duse Mohammed Ali 1933, and Dr. Benjamin Nnamdi Azikwe’s West African Pilot on November 22, 1937.

The West African pilot was the most popular nationalist daily at the time because Azikwe used it to effectively counter the pro-British Nigerian Daily Times. In addition, the paper pioneered numerous printing and typographic advances.

Interestingly, on Friday, December 21, 2012, Ìwé Ìròhìn was resuscitated in Abeokuta, the Ogun State Capital, after 145 years of its demise by the Nigeria Union of Journalists, Ogun State Council.

This time, in six columns and eight pages, of the 32-page tabloid, in full-processed colours (source).

You can also get A Carnage before Dawn, a historical account of Nigeria’s first coup d’état. E-book here. Paperback here. And on Amazon Kindle and Amazon Paperback.