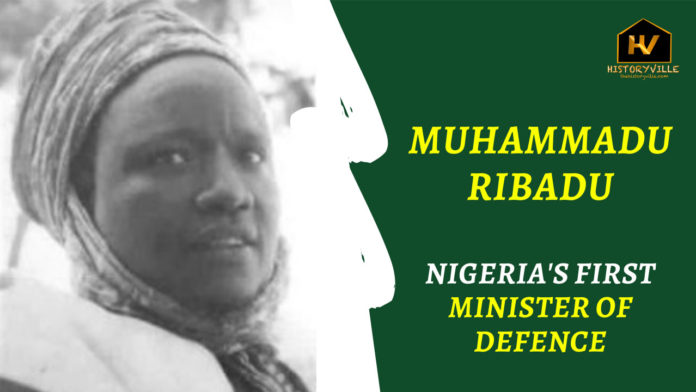 Alhaji Muhammadu Ribadu was the first Minister of Defence after Nigeria’s independence in 1960. Ribadu was born at Bulala, in present-day Adamawa State, North-East Nigeria. He was active in politics in the Northern Region and entered the Northern House of Assembly in Kaduna in 1947.

The Minister of Defence of Nigeria is a senior cabinet official in the Nigerian Federal Executive Council in charge of the Nigerian Ministry of Defence. The Defence Minister’s main responsibility is to manage all branches of the Armed Forces of the Federal Republic of Nigeria, to maintain a modern, competent, and professional military force for the protection of the national territory, maritime interests, airspace, and constitution of the Federal Republic of Nigeria.

As a result, Ribadu began a political career in which he rose rapidly. He soon became a leader of the Northern People’s Congress (NPC), founded in 1949 as a cultural organisation but soon turned into a political party in order to meet the requirements of the Macpherson Constitution.

Under the leadership of the Sardauna of Sokoto, Sir Ahmadu Bello (1909-1966), the most powerful politician during his era, the NPC won all the Northern seats in Nigeria’s first general elections of 1951-1952 and Alhaji Muhammadu Ribadu was one of the Northern candidates who won the election to the Federal House of Representatives in Lagos where he was appointed Minister of Natural Resources.

He was previously a director of the Nigerian Produce Marketing Company but resigned from this post to become a Minister.

…had Ribadu been alive as of January 15, 1966, nigeria’s first Military coup wouldn’t have happened…

As a Member of the British Empire

In 1954, Muhammadu Ribadu was appointed as the Federal Minister of Land, Mines, and Power; he served in that ministry until 1957 when he was transferred to the portfolio of Lagos Affairs. He was the second Vice-President of the NPC and of the most influential leaders of the NPC-dominated regime in the Federation.

Muhammadu Ribadu received a British decoration, being awarded the Member of the British Empire (MBE) in 1952.

As Minister of Defence: Power of Powers

No doubt, Alhaji Muhammadu Ribadu was a towering figure. A giant among men. He was in all but name, the deputy Prime Minister. He was powerful and intrepid. His colleagues often referred to him as the Power of Powers. He completed the Nigerianisation of the Nigerian Army and to this day, he’s still remembered as one of the most outstanding Defence Ministers Nigeria has ever had.

Some political analysts believe that had Ribadu been alive as of January 15, 1966, Nigeria’s first military coup wouldn’t have happened.

On May 1, 1965, he was to be honoured along with the then Prime Minister, Alhaji (Sir) Abubakar Tafawa Balewa (1912-1966) by the then Premier of Northern Nigeria, Sir Ahmadu Bello with gold medals of the Usmamiya order in Kaduna, but he died on the morning of that day. He was 55. Nigeria’s incumbent First Lady Aisha Buhari is a direct descendant.